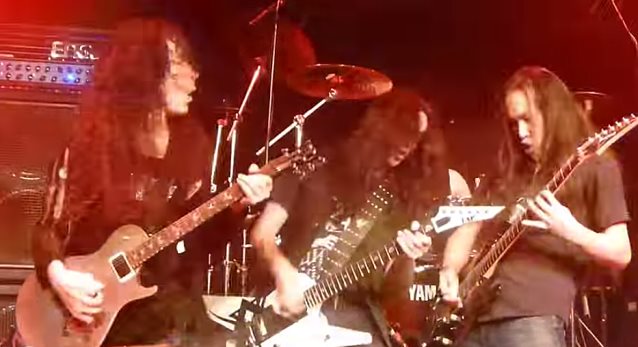 "Guitar Universe 2014" tourmates Marty Friedman (MEGADETH) and Gus G. (OZZY OSBOURNE, FIREWIND) were joined by Herman Li (DRAGONFORCE) on stage this past Wednesday (May 21) at O2 Academy Islington, London, England to play a cover version of the BLACK SABBATH classic "Symptom Of The Universe". Fan-filmed video footage of the performance can be seen below.

Gus G.'s debut solo album, "I Am The Fire", entered the official chart in Greece at position No. 27. The CD sold around 700 copies in the United States in its first week of release. The cover artwork was designed by Gustavo Sazes (ARCH ENEMY, KAMELOT, DREAM EVIL).