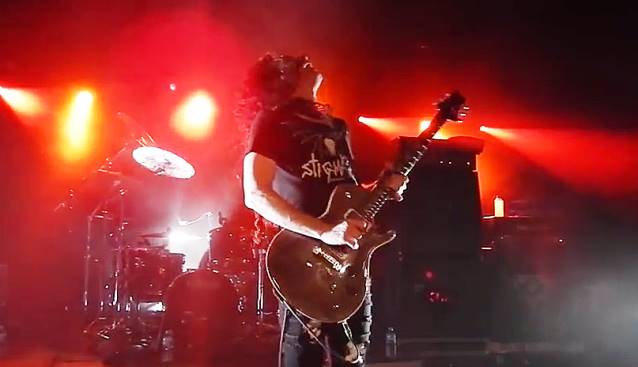 Fan-Filmed video footage of former MEGADETH guitarist Marty Friedman's May 17 concert at Muziekodroom in Hasselt, Belgium can be seen below.

Friedman's new solo album, "Inferno", was released on May 27 via Prosthetic Records. The CD — which was recorded primarily in Los Angeles with engineer Chris Rakestraw (DANZIG, CHILDREN OF BODOM) and mixed by Jens Bogren (OPETH, AMON AMARTH) — features what Friedman recently told Guitar World is "the most intense writing and playing I can do." The album also includes notable guest appearances by several artists influenced by Friedman, including flamenco/metal acoustic guitar duo RODRIGO Y GABRIELA, CHILDREN OF BODOM frontman Alexi Laiho, SKYHARBOR mastermind Keshav Dhar and David Davidson, as well as Friedman's first songwriting collaboration with Jason Becker since the pair played together in CACOPHONY, the pioneering duo of guitar mayhem. In addition, "Inferno" breaks all genre rules and creates new ones with an exhilarating and musically daring mash-up with Jørgen Munkeby of the acclaimed "blackjazz" act SHINING, as well as two tracks featuring vocals by rock guru Danko Jones. Overall, "Inferno" is by fa Friedman's most thrilling and adventurous effort to date.