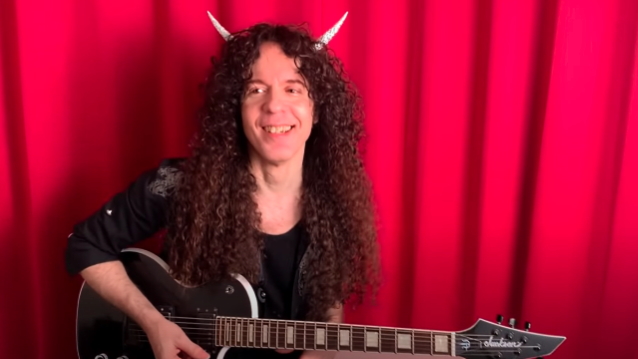 Former MEGADETH guitarist Marty Friedman has shared his metal interpretation of the opening theme song for the ongoing TV anime series "Demon Slayer". The original track "Gurenge" ("Red Lotus") was created by the singer LiSA and recently became the third most-downloaded single in all of Japan, having been downloaded more than 900,000 times.

"Gurenge" has reportedly been certified triple platinum by the Recording Industry Association Of Japan (RIAJ) for surpassing 750,000 digital sales.

According to LiSA's official Twitter account, "Gurenge" has been streamed over 100 million times across various subscription streaming services around the world.

Last year, Friedman, who moved from America to Tokyo in 2003, spoke to Australia's Amnplify about what it was like relocating to Japan at the age of 40. "It [was] a crazy decision, but it was really something I just had to do," he said. "It was all about the music. I found myself listening to Japanese 100 percent, and I had lost interest in what was going on in the American music scene. I was really consumed with what was going on in Japan, and I thought the only way I can really continue to grow as an artist is to make music that I really want to make, and contribute what I can to a music scene that really appealed to me. I thought the only way to do that was to live in Japan. I was really right. Sometimes it takes a really crazy decision like that to get to the next step in your career. I was very lucky that I either had enough balls to do it, or I was stupid enough to do it, one or the other..."

He continued: "After touring all over the place, you kind of don't really feel you're a foreigner in so many places, because you've been to so many places so many different times. You just feel like a citizen of the world, more or less, and you don't really feel that out of place whether you might be in Austria or China or Russia or Brazil. About three or four times going anywhere, you sort of feel like you know the place, and after being in Japan so many times, it really wasn't that big of a leap to actually live here."

As previously reported, Marty's long-awaited documentary, titled "Spacefox", will tentatively arrive in 2021. The film is being directed by Jeremy Frindel, the founder of Substratum Films.