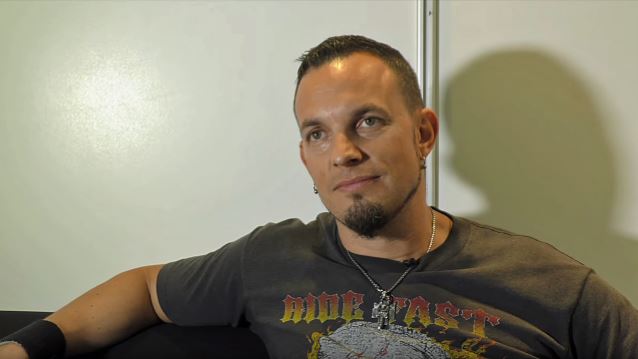 In a brand new interview with FaceCulture, Mark Tremonti was asked about the differences between his songwriting approach for his TREMONTI solo project and that of ALTER BRIDGE. He responded (see video below): "ALTER BRIDGE is… it's gotten heavier and heavier and heavier and heavier as the years have gone by. Now that I've gotten to do the TREMONTI stuff and get heavy with the TREMONTI stuff, now when I go back to ALTER BRIDGE, I've kind of purged a lot of the heavy stuff and I can be more back in the ALTER BRIDGE world, where it's more anthemic; ALTER BRIDGE is more epic, big songs. But Myles [Kennedy, ALTER BRIDGE singer], over the years, has written more and more heavy stuff, so when me and Myles get together now, we're writing heavier stuff than we ever have, but I think ALTER BRIDGE just has… Myles can do things with his vocals that I could never do, and ALTER BRIDGE lends itself very well to that big, epic feel. We like to leave a lot of space, we like long songs, we like to mess with our arrangements, where TREMONTI is kind of more heavy, fast [and] to the point."

The band is currently working on its fifth album with producer Michael "Elvis" Baskette for a fall release.

Tremonti released the third effort from his band TREMONTI, titled "Dust", on April 29.