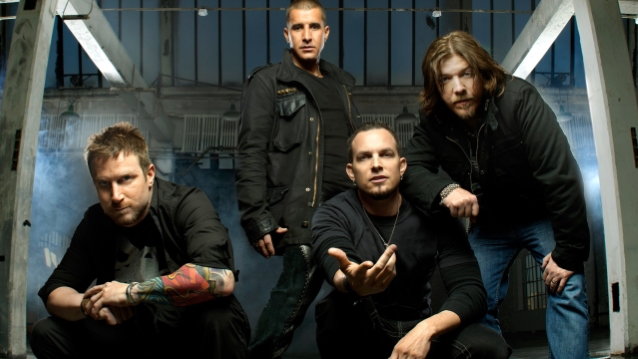 According to The Pulse Of Radio, ALTER BRIDGE guitarist Mark Tremonti said in a new interview on Jamey Jasta's podcast that he's sitting on an album's worth of material for his previous band, CREED. Asked whether CREED could reunite again, Tremonti said, "People say, 'Is it done? Is it over? Is there new music coming out?' I'm sitting on an entire CREED album... When we were together doing the reunion tour, we put a lot of music together and I have like really sketchy little demos of probably 13 songs. I listened to them maybe a year ago and they're good songs."

Tremonti added: "It's just, there's no time. Is it good enough for me to put everything on the back burner that I've been working on for the past 14 years? No. Is it good enough to maybe 10 years from now or seven years from now... or some big resurgence happens or there's an anniversary where everybody's like, 'We want to see CREED and the world demands it like they used to.' I wouldn't say no."

Tremonti, who also leads his own self-named band and plays in ALTER BRIDGE with the other instrumental members of CREED, told The Pulse Of Radio a while back he doesn't see CREED working again anytime soon. "I'm just so full of commitments between TREMONTI and ALTER BRIDGE, and juggling these two bands writing-wise and just touring-wise, it's like almost impossible to do all three, and I'm very satisfied with what I'm doing now," he said.

CREED disbanded in 2004 but reunited five years later for a fourth studio LP, "Full Circle", and an extensive tour. The band had begun working in 2012 on a follow-up album, but the project was abandoned. Singer Scott Stapp has toured and recorded as a solo artist, although he suffered a drug-related mental breakdown in 2014 and spent several years recovering from that.

Tremonti's solo band recently issued a new album titled "A Dying Machine", and the guitarist also noted in the podcast interview that ALTER BRIDGE is scheduled to return to the studio next spring.