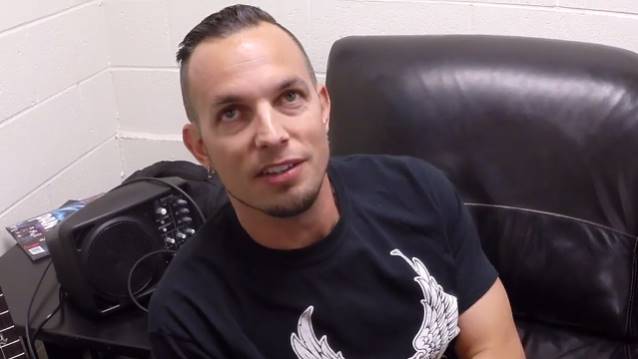 In a brand new interview with HNGN, ALTER BRIDGE guitarist Mark Tremonti spoke about the band's plans for the rest of 2015. He said: "I think we'll probably get together this year and get the ball rolling songwriting-wise, and 2016 is when we plan to hit the studio. We've got some offers for some shows later this year, but our schedules are so all over the place that I don't know if that's going to happen."

Mark also talked about the upcoming second album from his solo project TREMONTI, "Cauterize", which is due in June.

"The biggest difference [between 'Cauterize' and 2012's 'All I Was'] was the time we were able to put into the album," he said. "We had a very shoestring budget on the first one, a very small amount of time to get it done, whereas with this record we wanted to record a giant amount of songs; it's the most music I've ever recorded in one sitting. So if you compared it to even 'Fortress', the last ALTER BRIDGE record, we spent about a week, me and Myles [Kennedy, ALTER BRIDGE singer], putting together the outline of the album and then got right into pre-production, whereas with this album we spent 40 days writing before getting into pre-production, so there's a big difference."

He continued: "One of the big differences for me, personally, is that from touring off of 'All I Was' for about a year, my voice developed much more than just sitting home practicing. It's much better when you're out there getting real experience."

Regarding his working relationship with VAN HALEN bassist Wolfgang Van Halen, who joined Tremonti's solo band for touring purposes after ALTER BRIDGE bassist Brian Marshall dropped off the project, Mark said: "It's great. After you know him for a while, you don't really think of the Van Halen thing, he's just one of the dudes. We all just mess with one another more than anything, just like any band. But he's a very quick learner and he's very technically precise. I love his approach on the bass. I can't really think of another bass player who could outdo what he does on the bass. He's the best I've heard."