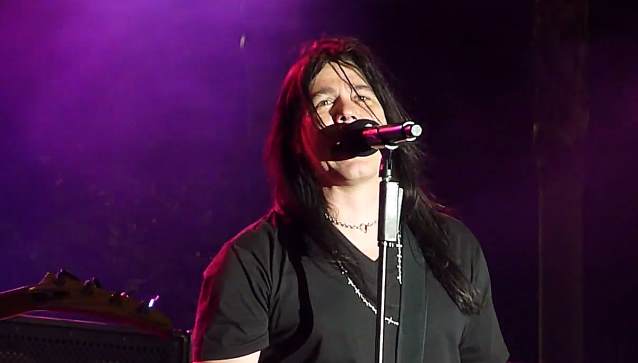 Joel Gausten: SLAUGHTER still maintains a very prolific performance schedule. I can still remember watching "Headbangers Ball" in 1990 when they focused on the KISS "Hot In The Shade" tour, which was your first time on the road with SLAUGHTER. It's been about 25 years since then. How has touring evolved for an artist like SLAUGHTER, who clearly still has a market you can serve on the road?

Mark Slaughter: We've never been an ego-based band; we never had three buses. We always did things very conservatively, and that's how we're doing it now...We fly in, do the show and fly back home, so it's not like this giant expense of doing things, and it makes it so there's less wear and tear on the band and it's a lot easier for a better performance because you're not spent... Flying in and flying out is not that difficult unless there are shows in a row. To me, I've always looked at [the performance] as we play for free and we get paid to travel. The travel is what's the pain in the rear. We always love performing; we love to make music. If I wasn't doing this for a career, I'd still be making music on the weekends. You have to have a love for it, first and foremost.

Joel Gausten: We're here talking about your new single, SLAUGHTER's very busy and KISS just went into the Rock Hall. This extended family of musicians is obviously still very active, but we're still waiting for Vinnie [Vincent, former KISS guitarist] to do whatever he's going to do next musically, if ever. Because you worked with him and gained some insight into his character, what do you think it might be about him — either in his personality or creative process — that has led to the fact that for basically 20 years now, we're still waiting for him to come out with his next thing?

Mark Slaughter: Vinnie is a very talented individual. I have not seen him since 1988. We walked off the stage in Anaheim, California, and I never saw the guy ever again. What's funny is that you're saying "neither has anybody else." He's done a couple of KISS conventions and things like that… I think that Vinnie's absolutely brilliant to the point where he's a perfectionist who will not let art be abandoned. Art is never finished; it's just abandoned. You get to a point to where you just have to walk away from your art and go, "That's good enough." I think that he's just re-painting and re-painting and re-painting, and that's what he gets in. I hope he does do some music; it's long overdue. He's an incredibly talented musician, writer, guitar player. I think a lot of the stuff I've seen him do hasn't even been recorded properly. In fact, [guitar maker] Grover Jackson and I were talking about this the other day. People don't know how talented he really is, but it is what it is. For some reason, he just hasn't put something out. I don't know anybody who knows him; I'm not at all in his circles. He's just in his own world, so who knows?

Joel Gausten: One creative relationship that seems to have worked very well for just shy of 30 years now is the one you have with [SLAUGHTER basist] Dana Strum. The music industry isn't really known for stability in personnel, but you guys have worked together for decades. What it is about your relationship that has enabled both of two to weather this industry for as long as you have and still continue to work together?

Mark Slaughter: Obviously, you start with friendship, first and foremost. The other thing is respect. I respect who Dana is as a musician and as a person, and likewise. I know where I stand with him, and he knows where he stands with me. The fact and he has been working with Vince Neil, and that the rest of my band's been doing all that stuff, is great. What's a better example of how talented these guys are then to be able to go and do that? That's when I got into my [solo] recording process; I thought, "Well, they're doing that. I'll just stay home and write some songs and record," and that's what I've been doing. SLAUGHTER still plays about 50 shows a year, which is quite a few. As far as us having this relationship for such a long time, I think it's because you get to point where basically we remember the things that people want us to forget. Both Dana and I have very good recall with people, places and things. We were able to do the [first] SLAUGHTER record ["Stick It To Ya"] without having anybody else tell us what to do. We had complete creative control. Everything that we did was from us. When you have music that wasn't written by an outside writer and it's something that comes from your heart, I think it's a little bit different than something [where] you're going through the motions and doing somebody else's songs.