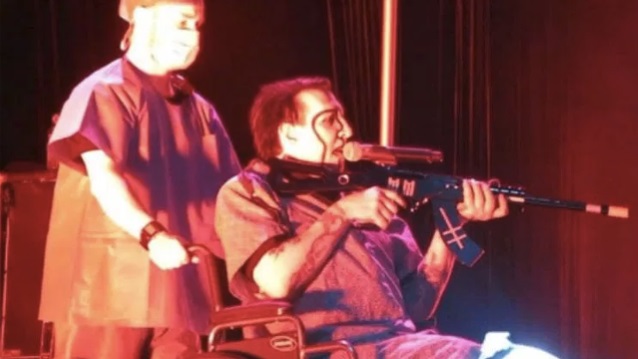 Marilyn Manson says that he pretended to shoot into the audience with a dummy assault weapon during his performance at this past weekend's Ozzfest Meets Knotfest as "an act of theater in an attempt to make a statement."

Last night's show at the Glen Helen Amphitheater in San Bernadino marked Manson's first performance after he broke his leg in two places a few weeks ago during a concert in New York. At Ozzfest Meets Knotfest, Manson performed in a wheelchair while wearing a hospital gown and pointed a fake assault rifle at the audience during the song "We Know Where You Fucking Live".

According to The San Bernardino Sun, it was clear to the audience that the weapon wasn't real and the concert attendees didn't seem to be offended by the stunt, although some people did find the gimmick to be "lame."

San Bernardino was the site of a horrific terror attack less than two years ago when a total of 14 people were killed and 22 more were injured during a mass shooting at the Inland Regional Center.

On Monday afternoon, the 48-year-old singer issued a statement about the move, saying: "In an era where mass shootings have become a nearly daily occurrence, this was an act of theater in an attempt to make a statement about how easily accessible semi-automatic weapons are and how seeing them has become normalized.

"My art has always been a reaction to popular culture and my way to make people think about the horrible things that happen in this world.

"My performance was not meant to be disrespectful or show any insensitivity. The prop microphone I used on stage was handed to me with the approval of a police officer.

"My empathy goes out to anyone who has been affected by the irresponsible and reprehensible misuse of REAL guns."

The song "We Know Where You Fucking Live", from Manson's latest album, "Heaven Upside Down", features lyrics relating to gunfire: "I love the sound of shell hitting the ground, man" and "Fire away," along with, "It's time to just kill this crowd / And scream as fucking loud…"