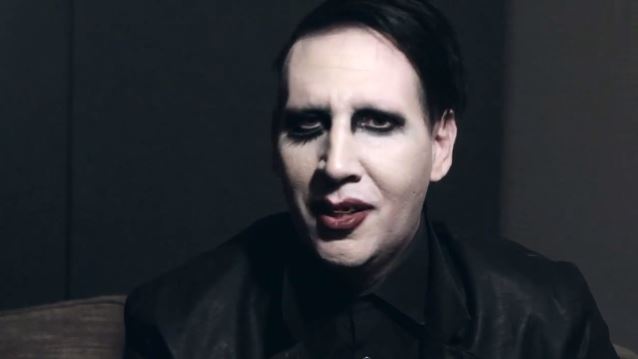 According to The Pulse Of Radio, Marilyn Manson has revealed in a new interview with Rolling Stone that he has a few odd habits when it comes to having sex. For starters, the shock-rocker will only have sex with the lights off and his underwear around his ankles, saying, "I'm just really shy, despite what you'd imagine. I have a phobia that the house is going to catch fire, and I don't want to be naked."

Manson, who was once married to burlesque queen Dita Von Teese and has been involved with actresses Evan Rachel Wood and Rose McGowan in the past, is currently dating American photographer Lindsay Usich.

Manson continued, "I don't really like being intimate with people. I think maybe twice in my life have I taken a shower with a girl, and that was in the dark… I also have a great fear of bathtubs, maybe because my mother used to bathe me as a child and I have fractured memories of just not enjoying it."

Despite his phobias, the 45-year-old Manson says he must engage in what he calls "sexual congress" a minimum of five times a day, with 10 being the most recent maximum.

Some of Manson's hangups may come from his childhood, which the singer has not spoken about much in the past.

Manson revealed that his mother suffered from Munchausen by Proxy syndrome, which causes people to induce or exaggerate symptoms of illness in children.

Manson spent a lot of time in the hospital as a child and had allergies, but now thinks some of his maladies may have been a result of his mother's condition. He said, "I didn't find out about the Munchausen until later in life, and I'm not sure how far back she had it. What I can say is that mental illness runs in the family."

Manson will release his ninth studio album, "The Pale Emperor", on January 20. The first single is called "Deep Six".

Manson will kick off his "Hell Not Hallelujah" tour on January 21 in Washington D.C., ending three weeks later in Las Vegas.