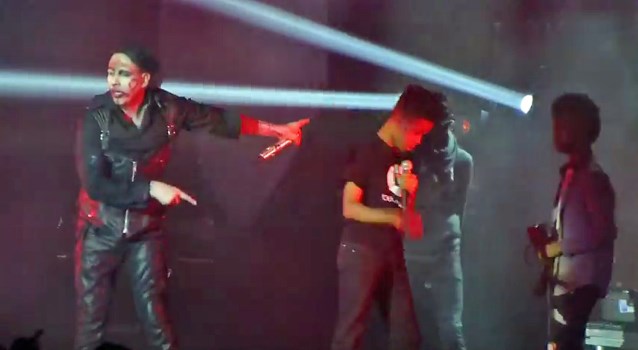 MARILYN MANSON was joined by members of support act UNLOCKING THE TRUTH for a performance of the song "The Beautiful People" on January 31 at the Sands Casino Event Center in Bethlehem, Pennsylvania. Fan-filmed video footage can be seen below (courtesy of Jim Powers).

UNLOCKING THE TRUTH, which is managed by "Welcome Back, Kotter" co-creator Alan Sacks, began attracting attention with its street performances in both Times Square and Washington Square Park in New York City. They even booked a gig at Coachella last year, and were the youngest group to perform.

The band was invited by METALLICA to perform at the Heavy Metal Montreal in Montreal, Quebec, Canada in August 2014 and enjoyed a slot on the Vans Warped Tour last summer.

MARILYN MANSON's new album, "The Pale Emperor", was released on January 20 via the shock-rocker's own label — Hell, etc. — in a joint venture with Cooking Vinyl and Loma Vista Recordings.

Manson collaborated on the new album, his first in over two years, with noted film composer/producer Tyler Bates ("Guardians Of The Galaxy", "300", "The Watchmen"). Bates has also joined Manson as a member of his band on the American "The Hell Not Hallelujah Tour", which kicked off January 21 in Washington D.C. Manson's band on the national headlining tour also includes longtime bassist Twiggy Ramirez, Gil Sharone on drums and Paul Wiley on guitar.