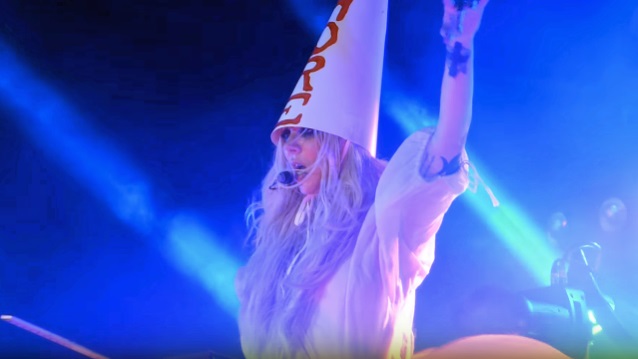 97.1 The Eagle's Ayo conducted an interview with IN THIS MOMENT singer Maria Brink at this year's edition of the Freakers' Ball, which was held on October 15 at the Verizon Theatre in Grand Prairie, Texas.

Speaking about IN THIS MOMENT's highly theatrical live show, Brink said: "Everyone's got their different way of expressing [themselves]. Some people, they do just go out there and rock, and it's perfect in that way, 'cause that's what's, I guess, natural to them. But for me, I love for people to really feel emotions and passion when they watch us, and they feel anger or they feel sadness or it feels sexual, but it invokes all these emotions. And not only by what you're hearing, but if you were to mute us and just watch us, you can kind of feel those feelings too. And I feel like when you put all those little pieces together, it's special."

Asked if she thinks it's more challenging that ever to move people emotionally with the arts, like music, and live theater in the current social media-obsessed world, Maria said: "I don't think so. 'Cause I'm one of those people that feels like the way you manifest things in your life is how you perceive it. So if I look at it, like, 'It's the hardest it's ever been,' and, 'It's so hard to do this,' I'm probably gonna hold myself back. So I try to look at it, like, 'It's not hard. This is what we do.' You've just gotta love what you do and put it out there and kind of think of that strong vibration and not worry about the things that can maybe be hindering it."

IN THIS MOMENT's latest album, "Ritual", was released this past July by Atlantic Records in partnership with Roadrunner Records. The disc features a guest appearance from JUDAS PRIEST frontman Rob Halford on the song "Black Wedding".