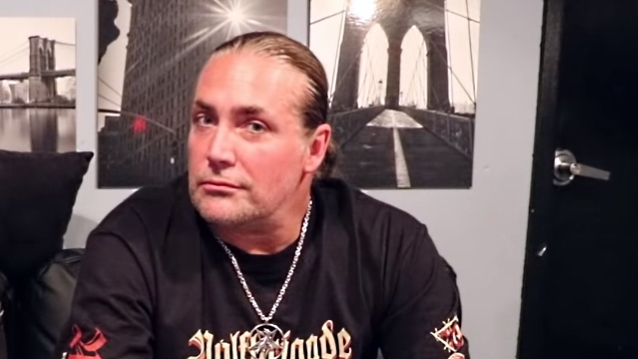 MARDUK guitarist and founding member Morgan Steinmeyer Håkansson confirmed several years ago that he owns pieces of MAYHEM vocalist Per "Dead" Ohlin's brain and skull, adding yet another layer to one of black metal's most infamous and enduring stories. MAYHEM's reputation has been brought back into light thanks in part to Swedish director Jonas Åkerlund's recent film adaption of Michael Moynihan and Didrik Søderlind's 1998 book "Lords Of Chaos: The Bloody Rise Of The Satanic Metal Underground". Both the book and movie chronicle the early 1990s Norwegian black metal scene that became notorious for its church burnings and murder.

Ohlin committed suicide by shotgun blast in 1991, leaving behind a gruesome scene that was captured in a widely circulated photograph taken by MAYHEM guitarist Øystein "Euronymous" Aarseth and later used for the band's "Dawn Of The Black Hearts" bootleg live album. Norwegian black metal legend has it that Euronymous (who was murdered two years later by BURZUM's Varg Vikernes) sent fragments of Dead's skull and brain matter to various members of the black metal scene whom he liked and respected, with Håkansson being one of them. Ohlin, who was the only Swedish member of MAYHEM, befriended Håkansson, a fellow Swede, several months before his death.

Håkansson was asked in a recent interview by Agoraphobic News (video below) to set the story straight on whether he actually owns pieces of Dead's brain and skull. "That's old news," he said. "[There's] too much written about it. It's become like a soap opera. People should leave it be. Whatever people call it, I find it really ridiculous, everything around it."

"'Blood Fire Death' is a theme that we are close to in our music and our spirit," he said. "We decided to do three loosely based themed albums on it. 'Blood Fire Death' is an old tribute to BATHORY and we did blood, which was 'Nightwing'. We did 'Panzer', which was fire, and the 'La Grande' album, which was death. It's the foundation that's very much the essence of this band and our lives. It's still very active, if I should say so."