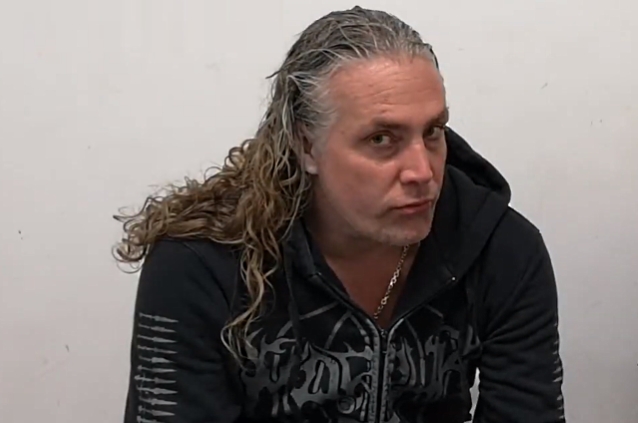 Jerry of Rauta conducted an interview with guitarist Morgan Steinmeyer Håkansson of Swedish black metal veterans MARDUK after the band's May 18 performance at this year's Steelfest in Hyvinkää, Finland. You can watch the entire chat below. A few excerpts follow (transcribed by BLABBERMOUTH.NET).

Morgan: "The thing is, when Fredrik [Widigs] told us he was looking to do something completely different in life and asked what we thought about it, I said, 'Do whatever you want to do. It's your life.' He wanted continue because he has a strong education as an architect and that's where is heart and soul is. He said a half a year before he went out, that was what he wanted to do. We said, 'Fine.' We continued to do what we did. He was the one who said, 'The new drummer you should get is Simon.' We listened to him and he's a competent drummer. We contacted him and spoke to him, and we learned we shared a lot of the same devotion and ideas. It became a very natural thing and very smooth. We actually never rehearsed. He rehearsed on his own. We met up before in Russia the day before the shows, and that was the warm up before the European tour. He's very dedicated, very focused, hard-hitting, stable drummer."

On whether he worries what lineup changes will do to the chemistry of MARDUK:

Morgan: "In a way, because you should take your time with members. We met up before he joined us. We had a long, great discussion, then he went back home and rehearsed, then we met up and did it. That proved to me that he's focused, dedicated, strong, and that's the way we like it."

On whether he anticipated MARDUK would go through so many lineup changes upon their 1990 formation:

Morgan: "Yes. Because we have had so many members change over the years, but I mean, nothing lasts forever. Some bands do, but a lot of bands don't. I think it's natural because we're a band that tours a lot. We work very hard. We're devoted to what we do, and I believe in what I do, which I find the most important thing — whatever you do in life is to believe in what you do, otherwise, you shouldn't do it, whatever you do. Our drummer told me he'd like to focus on the architecture thing, I said fine. Same with the other members who have come and gone. Everybody is focused on different things. I'm focused on this band. It's my life, therefore we've had a lot of changes, but that's what you need to keep it focused. Over the years, we have done around maybe 1,500, 1,600 shows, we've done 14 albums, and we've toured a lot, and we believe in the idea of reaching as many territories as possible. Everybody's not into it. Some people think they are, but over the years, you go in different directions. It's like a marriage."

On what keeps MARDUK going:

Morgan: "As I said, we're very focused and we believe in what we do. I believe in the albums we have done. I think for us, we're stepping across new boundaries, we're doing what we believe in, and we sing about things we find interesting, fascinating, and believe in whatever it is. It creates soundtracks to a lot of these historical happenings. I like it."

On the criticism MARDUK has received for covering controversial topics:

Morgan: "I find that amusing. In a way, I like problems. I love problems. Life is about overcoming problems because we all get it. I will never back down from people who said, 'You can't do this. You can't do that. You can't sing about killing Christians and about raping them and doing whatever.' As soon as you sing about, for example, a theme related to World War II in a way that it happened, it's, like, 'Oh, you stepped over the line.' It's not my fucking life, so fuck off. I don't care. We will always do what we believe in and I don't give a shit about what people are talking about. I don't read; I don't care. For me, it's only about overcoming the idiots."

On trying to overcome "political correctness," which sometimes has forced MARDUK to cancel shows:

Morgan: "No, I'm not worried. If it's a big problem, it will be a problem. We might have to cancel shit here and there — I don't give a shit because we will never let anybody tell us, 'It's okay to do this. It's okay to do that.' We'd never been a band who adjusts to what people think, we do what we believe in. That's the most important thing. I will never let anybody tell me what to do. People can take history as it is. It's their problem."

On how he feels about the band's early, largely Satanic lyrical themes:

Morgan: "We all get older; we look at things in a different way. You need to grasp the lyrics and read it; you'll see that it's not really changed. When I go back and I look upon all the albums which we do once in a while when we rehearse the old songs, sometimes it surprises me because the lyrics, when I read them now, they mean even more to me than they did back then. They speak to me in a different way."