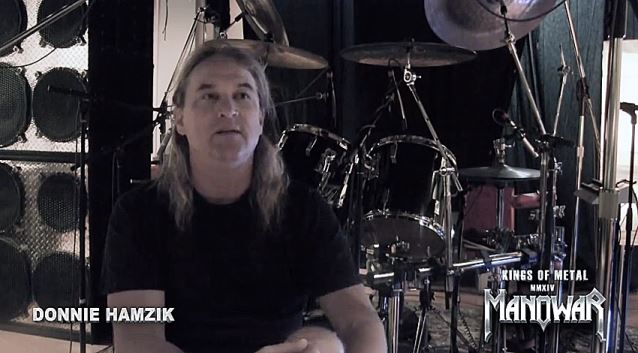 Excerpts from an interview with MANOWAR drummer Donnie Hamzik in which he talks about his experience in the studio recording "Kings Of Metal MMXIV", a newly recorded special version celebrating the 25th anniversary of MANOWAR's "Kings Of Metal", can be seen below.

Along with the release of the new album, the band will also open their vaults and reveal never-before-seen video footage, photos, behind-the-scene interviews and more.

The new recordings will feature guitarist Karl Logan's and drummer Donnie Hamzik's contributions, who, after having played these classic hymns many times live, will now have the opportunity to add to their legacy by including their own signature sound and performance. The new album will also feature movie and theater legend Brian Blessed ("Hamlet", "Flash Gordon") narrating "The Warrior's Prayer".