Former MAYHEM frontman Maniac, whose band SKITLIV has proved to be a surprising departure from the black metal genre for which he was best known for over 20 years, has formed a side-project with fiancée Vivian Slaughter, bass player/vocalist with the Japanese all-girl band GALLHAMMER, and SKITLIV's guitarist Ingvar Magnusson. The band, going by the name of NOVA EXPRESS, has already signed with the UK label Cold Spring Records. Unlike SKITLIV, which is a noise/doom amalgam, with Maniac's vocals still firmly rooted in black metal, NOVA EXPRESS is in the noise/darkwave/ambient genre, with any vestiges of black metal pared away.

Maniac's manager commented, "Whilst preparing some tracks for the forthcoming SKITLIV album, he and Ingvar came up with an 11-minute track called 'Immaculate Fix' that didn't really fit in with SKITLIV's musical style. Maniac has been concentrating not just on music, but also on his writing recently, and when we heard the track we realized just how much of an influence his literary work had had on the way the music and lyrics interacted, and that what was needed was a separate vehicle that would better suit this different style of writing and delivery. Where SKITLIV is very much Maniac's unpredictable offspring, the band is all about extremes and expecting the unexpected, NOVA EXPRESS, on the other hand, is its more thoughtful, introspective, sibling.

"I'm sure the lineup of the band will have surprised some people, but it's not really that surprising.

"Maniac and Ingvar have been writing and playing together for a few years now, and the two get on very well both on a personal, as well a musical level.

"Vivian and Maniac met for the first time when SKITLIV toured with GALLHAMMER about a year ago and recently became engaged. They both share the same eclectic tastes in music, and Vivian is very much into the style of music that NOVA EXPRESS will be playing, so she will shortly be recording her parts for the album in Japan."

Regarding the decision to work with Cold Spring Records, his manager went on to say: "We spoke to Justin Mitchell of Cold Spring about the track and the concept and he immediately offered the band a contract. Cold Spring recently released SKITLIV's 'Amfetamin' live album, but SKITLIV itself is not actually signed to the label. 'Amfetamin' is as two-part project that, as longtime friends, we all thought would be a fun thing to do, and has proved to be very popular. NOVA EXPRESS fits in with Cold Spring's catalogue, and it's a label that everyone involved in the band very much admires, both in terms of output and ethos, so it was a logical choice.

"We have booked the studio for late autumn to record the NOVA EXPRESS album, which has a working title of 'Narrow Birth', and we will also be putting the finishing touches to SKITLIV's 'Glem Aldri Korset'. Following the release of that album, SKITLIV will start touring. We have no immediate plans to take NOVA EXPRESS on the road, but given that Maniac very much enjoys playing live, I would suspect that you will be seeing the band perform live sooner or later."

The veteran frontman recently provided the lyrics and vocals for one of the tracks on DEADWOOD's "Ramblack" album, which was released this week on Cold Spring Records, and later in the year the label will also release the second part of the "Amfetamin" project in the form of a limited-edition picture vinyl. One side has been designed by Maniac's tattooist Azztri, and is a portrait of Maniac, current MAYHEM vocalist Attila, and SHINING frontman and SKTILIV guitarist Niklas Kvarforth. The other side will be a design by CURRENT 93's David Tibet. Maniac is also collaborating on a song with Andrew Liles.

The official website for NOVA EXPRESS can be found on MySpace at this location. 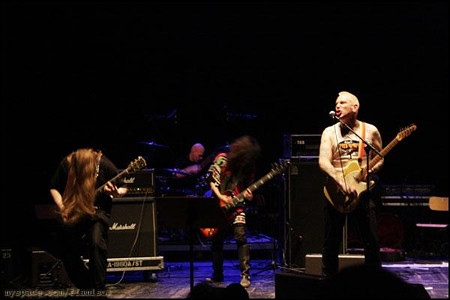