According to a press release, "Dawn Of Reprisal" features "10 hammering songs leaving any metalhead worldwide nothing but satifsfied with a mischievous smile on his face! Packed full of "face-melting riffs, fret-shredding guitars and a sense of groove that will stand up against any name you care to mention," "Dawn Of Reprisal" was recorded and mixed by Dan Weller and Justin Hill (ex-SIKTH) at Fortress Studios and Timeless Studios in London, and was mastered at 360 Mastering by Dick Beetham.

Comments the band: "'Dawn of Reprisal' is a massive step forward for all of us as a band, and individuals. MALEFICE has matured a lot in a short space of time and one listen to this new record will show you that. We've crafted our sound into what we all missed about metal. Killer riffs, punishing drums, intense vocals and songs you can break your neck to!" 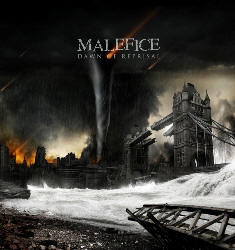 MALEFICE's "Risen Through The Ashes" video (taken from the band's debut album):