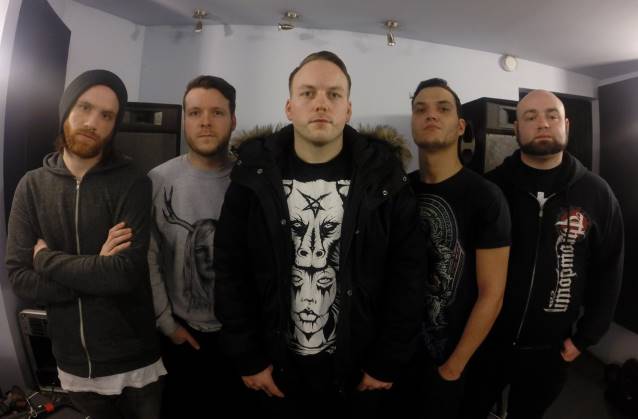 U.K. metallers MALEFICE will release a new EP in May. The currently untitled record will feature four new tracks as well as a remix of the blistering single "V".

The MALEFICE members are producing the new EP themselves, with plans to have it mixed and mastered by Justin Hill.

Comments MALEFICE vocalist Dale Butler: "After taking some time out from the band to do our own things and focus on our own lives, we came back together not feeling as we had given all we have to give to MALEFICE.

"We are going to back to what makes us MALEFICE and were gonna write some fucking heavy music to headbang to. And that's that."

MALEFICE has also announced the addition of drummer James Pearly Cook to the group's ranks. James, who has previously played with ANTERIOR and BORN OF RUIN, is playing an active role in making the new MALEFICE EP and is very excited to hit the road later in 2014.

In other news, MALEFICE is offering budding producers a chance to appear on the band's new EP. The group has made the stems for the track "V" available to download and they invite you to enter a competition to get your remix of the track on the new record. There are no guidelines, no genre or style limitations; the aim is to reinterpret the song in the most exciting and unique way possible.

Check out the video to the original track "V" below.

All remixes are to be uploaded to SoundCloud and added to the MALEFICE "V" remix group and posted on social media tagging the band.

The band's favorite remixes will then be posted on the MALEFICE Facebook page, tagging the producer, to get feedback from fans and to help them to chose the winner.