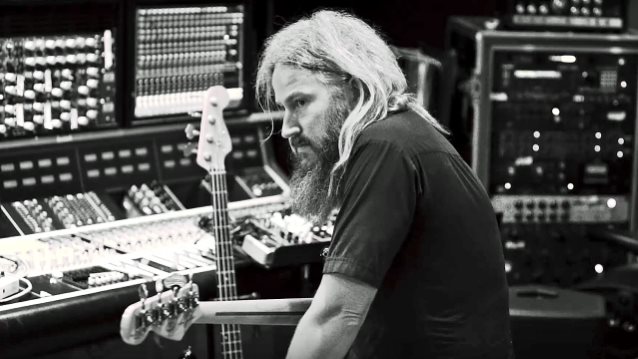 The first in a series of video clips featuring behind-the-scenes footage from the making of "Emperor Of Sand", the eighth studio album from Atlanta heavy rock icons MASTODON, can be seen below. Due on March 31 via Reprise Records, the follow-up to 2014's "Once More 'Round The Sun" is available for pre-order beginning today at www.mastodonrocks.com. The deluxe pre-order package will contain the album on double 180-gram vinyl housed in a gatefold jacket along with a bonus Color-In-Your-Own vinyl jacket, plus an exclusive box of MASTODON colored pencils. In addition, fans will receive a digital copy of the entire album on March 31, along with an instant download of the album track "Sultan's Curse". "Emperor Of Sand" will also be available digitally and on CD.

The typically stunning "Emperor Of Sand" album artwork was created by Alan Brown, a.k.a. Medusawolf, who is also responsible for the inside gatefold images.

"Emperor Of Sand" finds MASTODON returning to a deeply imaginative and complex conceptual storyline that ponders the nature of time. Threading together the myth of a man sentenced to death in a majestically malevolent desert, the band conjures the grains of a musical and lyrical odyssey slipping quickly through a cosmic hourglass.

"'Emperor of sand' is like the grim reaper," says drummer/vocalist Brann Dailor. "Sand represents time. If you or anyone you know has ever received a terminal diagnosis, the first thought is about time. Invariably, you ask, 'How much time is left?'"

"We're reflecting on mortality," adds bassist/vocalist Troy Sanders. "To that end, the album ties into our entire discography. It's 17 years in the making, but it's also a direct reaction to the last two years. We tend to draw inspiration from very real things in our lives."

"Emperor Of Sand" was recorded at The Quarry Recording Studio in Kennesaw, just outside MASTODON's hometown of Atlanta, with producer Brendan O'Brien (PEARL JAM, NEIL YOUNG, AC/DC, RAGE AGAINST THE MACHINE), who first worked with MASTODON on their seminal 2009 album "Crack The Skye".

Over the course of MASTODON's career, the band members have fearlessly continued to push themselves towards greater creative heights on their recorded output. Each studio album has united an ever-expanding worldwide legion of fans who have come to expect the unexpected twists and turns that have elevated MASTODON to become one of the most respected and influential creative forces in rock music.

MASTODON kicks off a spring U.S. headline tour in support of "Emperor Of Sand" on April 14 in Missoula, Montana, with support from EAGLES OF DEATH METAL and RUSSIAN CIRCLES. The tour also includes stops at several festivals, including the Carolina Rebellion on May 5.

Each pair of tickets purchased online for MASTODON (excluding festival dates and the May 6 Philadelphia show) includes a choice of a physical or digital copy of "Emperor Of Sand". Ticket purchasers will receive instructions via e-mail on how to redeem the album on March 31. Tickets are on sale now.