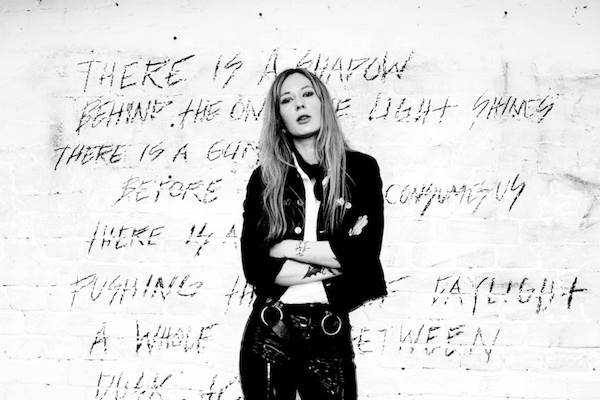 MAGGOT HEART, the brainchild of Swedish guitarist/singer Linnéa Olsson (former member of BEASTMILK, GRAVE PLEASURES, SONIC RITUAL and THE OATH), will release its debut album, "Dusk To Dusk", on July 13 via the Berlin-based imprint Teratology Sound & Vision. As was the case with the 2017 EP "City Girls", the LP sees Linnéa employing the services of fellow Swedes Uno Bruniusson (PROCESSION, DEATH ALLEY, ex-IN SOLITUDE and GRAVE PLEASURES) on drums and Gottfrid Åhman (NO FUTURE, REVEAL, ex-IN SOLITUDE, INVIDIOUS, REPUGNANT) on bass.

Recorded at Studio Cobra (IN SOLITUDE, NIFELHEIM, PIG EYES) in Stockholm in December 2017 under the guidance of Martin Ehrencrona, "Dusk To Dusk" sees MAGGOT HEART building on the sound of "City Girls" to expand its boundaries and achieve a very personal result, which is much more than the sum of its influences.

"Dusk to Dusk" is the sound of a comedown in the blue light of the dawn. Darker, monolithic and slightly melancholic, its nine songs move through pictures of isolation in altered states. We get presented with a highly dynamic spectrum of saturnine moods that builds the fundament for snarling, rusty guitars that wouldn't be out of place on neither a KILLING JOKE nor a STOOGES record. They steadily mingle and fight with a powerful rhythm section that is at times reminiscent of the maddening stomp that put noise rock heroes like THE JESUS LIZARD or THE BIRTHDAY PARTY in the pantheon of rock music. "Dusk To Dusk" is an album well informed by what has happened in music since the late seventies, yet never relying on past achievements. This is a highly personal "alchemical blitz" that, through unorthodox instrumentation and intense lyricism, highlights a certain kind of savagery in rock and roll that seems to have gone missing in the retro-craze of the 2010s.

The city that never sleeps and struggles to pay the rent and find its soul gave Linnéa Olsson the inspiration for her new project. After leaving native Sweden in 2012 where she had been active with metal punks SONIC RITUAL and as a music journalist for over a decade, Linnéa relocated to Berlin, where she soon co-founded the short-lived-but-much-celebrated THE OATH, for which she was the main songwriter. After their early demise, she was asked to join Finnish band BEASTMILK on second guitar, which shortly afterwards changed their name to GRAVE PLEASURES and went on to release the album "Dreamcrash".