Long Beach, New York-based cinematic metal band MAELSTROM has posted a teaser of the track "A Futile Crusade" online at its MySpace page. The song is featured on the group's forthcoming three-song EP, "It Was Predestined" (Perfect Storm Recordings), which is due this November. The three tracks have been re-imaginined and re-constructed from music written 20 years ago and are being released on CD for the first time ever.

Commented the band: "The song 'A Futile Crusade' marked a real turning point in MAELSTROM's writing style. Musically we made a huge leap in maturity — abandoning a more simplistic structure style of verse chorus etc. in favor of huge themes that pulled the listener into the landscapes we were creating. Lyrically this song introduces the master malevolent being in the world and the clashes of the conflicting armies that have torn the planet apart. This song has it all from the intensely evil driving intro, the classically influenced march section, the 'dance groove' bridge and its intense ripping main verse, as well as some melodic vocal stylings and some very aggressive double bass."

The material on "It Was Predestined", originally written back in the thrash-infested days of 1988, had never fully been able to ignite and make the impact that it should have, pushed to the wayside as grunge and mainstream success had slowly snuffed out a good amount of the metal scene. Twenty years later and founding members Gary Vosganian (vocals) and Joey Lodes (guitar, bass, keys) reunite with new drummer Daniel Kleffmann to even the score.

Commented Vosganian: "This was a path that needed to be taken, there was a story that needed to be told, in music, words and art. We had these sorted pieces of work that had never quite formed the vision Joe and I had for MAELSTROM. I am still proud of some of those past efforts; they led us to this point. In fact, the material may be even more relevant today, rather then in its original incarnation twenty years ago. Now however, we can finally and unequivocally say, this is MAELSTROM. This is the vision we had together all those years ago."

In order to bring a modern touch to their recording and sound, the band reached out to legendary studio ace Tue Madsen (DARK TRANQUILLITY, HIMSA, THE HAUNTED) to mix and master the music.

"It Was Predestined" track listing: 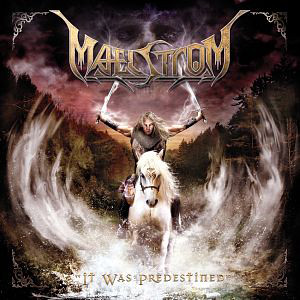