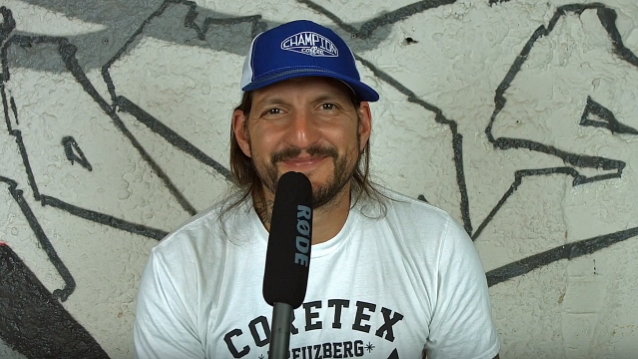 Oli of Grasser Production conducted an interview with frontman Freddy Cricien of New York hardcore veterans MADBALL prior to the band's August 26 concert at Z-Bau Nürnberg in Nürnberg, Germany. You can watch the entire chat below. A few excerpts follow (transcribed by BLABBERMOUTH.NET).

On whether playing in front of non-hardcore crowds at festivals alters the band's approach:

Freddy: "I don't think we would behave differently, but more often than not, it's not a hardcore festival, especially during the summer season, the festival season. A lot of the festivals are more metal-based or punk-based, even pop ones, we've done more poppy ones, which is kind of weird. But there's only a few, like a handful that are dedicated to hardcore and we didn't do many of those on this particular run. So, yeah, it's cool, though. For us, we almost prefer those festivals because it's sort of expected for us to play hardcore festivals, but it's a little unexpected when we play something that's got, like, I don't know, whatever bands on there, Top 40 bands, then all of the sudden, there's this New York hardcore band from an underground scene playing. It's challenging for us and I think that's good because we've been around for a while. We need to be challenged and tested a little bit and we also need to present our music to a wider audience, like different people besides hardcore kids. So, yeah, a lot of times we're the odd men out, but, we kind of like being in that position, actually."

On how MADBALL has fared after the departure of longtime guitarist Brian "Mitts" Daniels:

Freddy: "It hasn't been a bad transition. We made the decision to let Brian go right before we started getting heavily into writing the record because it was just one of those things that was going to happen and it was the smartest time to have it happen before we get too deep in the writing process or anything else. It was a bit hard for the writing process to be a man down. But [Jorge] Hoya [Guerra], he writes a majority of the riffs anyway. Hoya, my bass player, our bass player, he just stepped up and pretty much played the guitar and so there was no bass while we were writing, but that was really kind of the only kind of off thing was during the process. We were one man down, but that didn't affect the songs we were writing or what we were trying to do or accomplish with the record at all. Luckily, we've been able to transition pretty well live because our friend Dom [Stammen], we nicknamed him 'Lord Frost', and he's out here and he's worked in our camp before. He plays with a band BORN FROM PAIN, who I'm sure a lot of people know. Yeah, he just fit right in. He stepped right in and started playing with us and he helped us out in a big way in Europe and we got sort of a couple of guys back home, the same kind of thing, they're very talented guitarists, but they're also our friends, so they've come in and filled that slot. It hasn't been that crazy. We've had good luck that we have good friends that are talented that have helped us out. Pretty soon here we may have a permanent guitarist. We've just been focusing on doing these tours that we had commitments that we had to do for the record and stuff, but I think pretty soon we're going to have a more permanent person."

On what makes their new studio album, "For The Cause", different from previous MADBALL records:

Freddy: "A few things, several things, I would say. It's the most diverse record we've done, period. It's one of my personal favorites, but that's me, you know. Everyone's different. Some people are going to say 'Set It Off' was their favorite because that's when they got into our band in that time period, but overall, the feedback has been super-positive from old-school heads and new people, so that's a good thing. But we personally love the record and we needed to start diversifying a little bit. We're known for a certain sound and a certain style and that's great that we're known for a certain style within our scene, but you also have to grow a little bit and I feel like we did a lot of growing on this record. A lot of diverse stuff; it's all MADBALL, but it's different little flavors here and there and I think the record is the most diverse record we've done and we're happy with that and we hope everybody else is happy with that."

On his reaction to the comment from SLAPSHOT vocalist Jack Kelly that his lyrics have no deeper meaning and hardcore is mainly about violence:

Freddy: "It's definitely more than having a good time for us. I can't speak for Jack; I can't speak for SLAPSHOT. That's his business. If that's what it does for him, then hey, more power to him. For me, I think for all of us, it's an outlet, even for him, for us, I think it's definitely first and foremost, it's an outlet to express whatever. But to say that there's no deeper meaning other than everyone just go hit each other, that doesn't really fit us because I think our songs do touch on things that are important to us and are relatable with other people. I think people relate to what we're talking about, even if they're not from the same upbringing or background or city or whatever, but human stuff, just adversity, growing up, so, for us, there's definitely meaning behind what we do. Some are deeper than others. Some are not so deep and very blunt and straightforward, but some people like to hear things bluntly and straightforward and then the dancing and the all the expression goes hand-in-hand with what you're feeling. So, to me, to just dismiss it as just that, I think he's being a jerk. I think he really believes that."

On the claims that hardcore is nothing more than mindless brutality:

Freddy: "I never felt that way about it and I've been into this a long time since I was a very young boy. Sure, it's an aggressive form of music and it's an outlet and it's an aggressive one. There's a lot of thrashing around and movement and very fitting for a person like me, but it's not for everyone, but obviously, there's a lot of people that feel the same way. I can't just write it off as something that's just about punching each other in the face. It would be dismissive to our culture. There's more to it than that. That's the way some people want to view it, like 'Look at this barbaric stuff, people just hitting each other.' It's like fighting; I really don't like to fight. Can I fight? Yeah, if I'm put in the position, yeah, of course. I can handle myself alright. I got a pretty hard punch, but do I want to fight? Not really. If I'm tested, I'll fight you and I'll give you a good one, you're going to remember me, but it's goofy to say, 'It's just about hitting each other.' No, this is music, this is art, it's about expression, it's about a lot of emotional things. For everybody it's different."

"For The Cause" was released on June 15 via Nuclear Blast. The follow-up to 2014's "Hardcore Lives" was co-produced by Tim Armstrong (RANCID), who also makes a guest appearance on "The Fog". It was mixed and mastered by renowned producer Tue Madsen (MESHUGGAH, THE HAUNTED, SICK OF IT ALL) at Antfarm Studios in Denmark. Former MADBALL guitarist Matt Henderson laid down the guitar tracks in the studio but has not joined the group on tour.