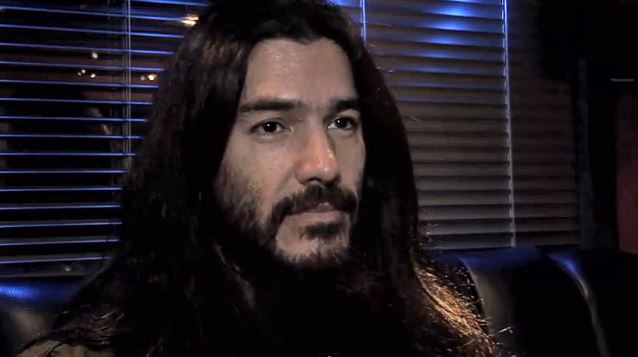 San Francisco Bay Area metallers MACHINE HEAD will enter the studio in February to begin recording their new album for a late summer release via the band's new label, Nuclear Blast Entertainment. Tentative songtitles set to appear on the CD include "Killers & Kings", "Beneath The Silt", "Ojos De La Muerte", "Sail Into The Black" and "Night Of The Long Knives".

Regarding whether the songwriting process comes more easily after more than two decades as a band, Flynn said: "I just try and do my thing. With this record in particular, I've tried to discipline myself more with routine, writing a little bit every day, but for months I was in a riff rut. Every riff I wrote fuckin' sucked! Then we took a two-week break and I was writing my Facebook journals about the 'Through The Ashes Of Empires' [MACHINE HEAD's 2003 album] story, and that cleared my head. At the end of those two weeks, the floodgates opened and all hell of riffs poured out. I was so stoked! This torrent of riffs, this molten hot lava, was at my fingertips. It's such a good feeling."

Flynn also revealed that MACHINE HEAD has "definitely got some ideas" for the artwork and imagery for the band's new album, but added: "It's weird, though, because who the fuck even buys albums anymore?

"An album cover is a necessary thing but for so many people it's justa little one-and-a-half-inch square on an iPhone.

"We're going to have a lot of worldwide special editions, so for the people who are still into that stuff, we'll have some next-level shit. Especially with our new label, Nuclear Blast, they can do all of that stuff. They're not afraid to do all these crazy, over-the-top special-edition things and big two-foot metal cases and all that.

"I'm a super-nerd collector and that shit rules to me!"