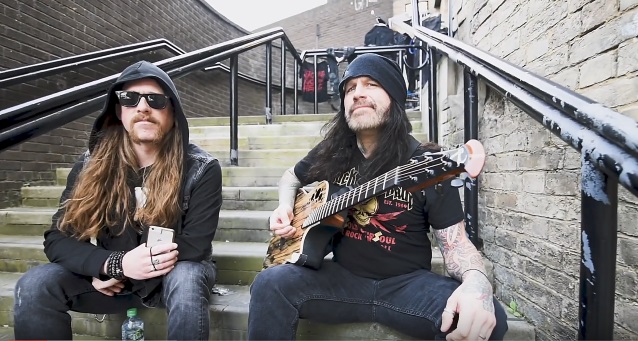 Before the first of MACHINE HEAD's two shows in London, guitarist Phil Demmel and bassist Jared MacEachern paid tribute to Chris Cornell on the first anniversary of the SOUNDGARDEN and AUDIOSLAVE singer's death. The duo performed a cover version of the AUDIOSLAVE song "I Am The Highway", with Demmel on acoustic guitar and MacEachern on lead vocals. Check out video footage below.

Chris was found hanged in his room at the MGM Grand Detroit hotel on May 18, 2017, following a SOUNDGARDEN show at the city's Fox Theatre. His body was found soon after he had spoken with a "slurred" voice to his wife Vicky by phone.

From the very beginning, his family has questioned the medical examiner's ruling, saying that he had a prescription for Ativan and that a higher than recommended dosage may have caused him to experience suicidal thoughts.

Vicky believes that her husband was not depressed and his death was not a suicide, but was instead brought on by the effect of the Ativan.

MACHINE HEAD is currently on the road in Europe in support of the band's latest album, "Catharsis", which came out in January.