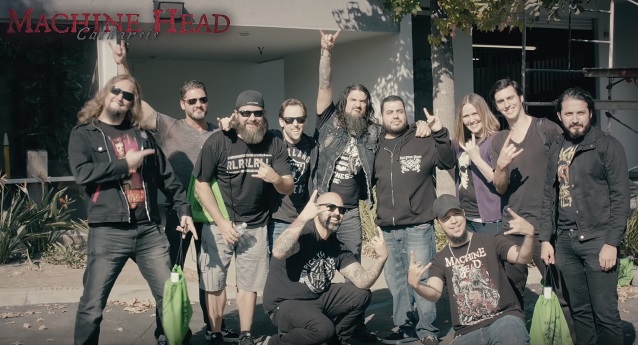 On November 10, ten "lucky head cases" from Los Angeles were treated to an advanced listening session of MACHINE HEAD's ninth studio album, "Catharsis". They were the first few in the world to have heard the band's follow-up to 2014's "Bloodstone & Diamonds". What did they think? Was it what they expected? Watch the clip below and find out.

"Catharsis" will be released on January 26, 2018 via Nuclear Blast. The effort will be made available in several formats, including a CD/DVD digipak edition which contains footage of the band's 2015 concert at San Francisco's Regency Ballroom.

"Catharsis" was produced by MACHINE HEAD frontman Robb Flynn and recorded, mixed, and co-produced by Zack Ohren (FALLUJAH, ALL SHALL PERISH) at Sharkbite Studios in Oakland, California. Mastering was handled by Ted Jensen (HATEBREED, ALICE IN CHAINS, DEFTONES) at Sterling Sound in New York. Cover photography was created by Seanen Middleton.