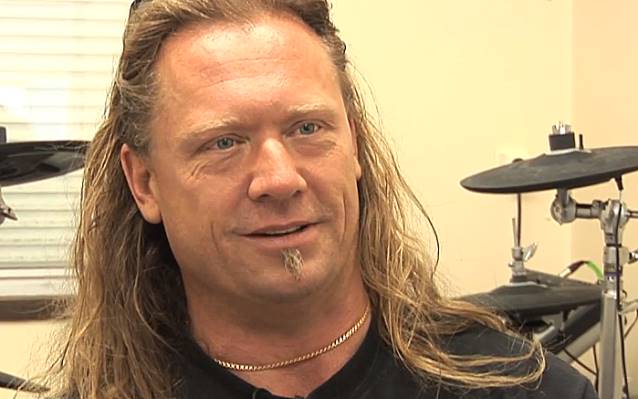 According to Courthouse News, ex-MACHINE HEAD bassist Adam Duce has filed a lawsuit against his former bandmates alleging trademark infringement, breach of partnership agreement and defamation, among other things.

Duce was fired from MACHINE HEAD on February 11, 2013, a few months prior to the band signing a new deal with Nuclear Blast Entertainment. According to Adam, he was expelled from the group "after he put 21 years of his life into it" so as to allow the other bandmembers to make a bigger profit.

Although MACHINE HEAD formed a general partnership and a corporation under which each member owned 25 percent, the band's guitarist/vocalist, Robert Flynn, got a larger portion of the band's income, Duce claims.

"After receiving very little compensation despite the millions the band was bringing in, plaintiff requested and reviewed the records from the tours. Plaintiff found that [the band's manager, co-defendant Joseph W.] Huston, Flynn, and PFM [Provident Financial Management] had squandered money throughout the trip without consulting plaintiff for the vast majority of 'expenses,'" Duce says in the lawsuit.

"Despite their increase in popularity and touring revenue, [Duce] became concerned with how little income he was receiving, despite the time and hard work put in to developing the band," the complaint states.

"Though he expressed these concerns to Flynn, Huston, and PFM, [Duce] was never satisfied with the answers he received."

The complaint adds: "Despite plaintiff's expressed concerns, he was unable to make enough money to live within his modest means. Because of this, when the band was not touring, plaintiff supplemented his income as a licensed real estate appraiser."

The lawsuit goes on to say: "After [guitarist] Ahrue Luster left the band and was replaced by [Phil] Demmel, MACHINE HEAD continued as a partnership in which all four members — [Duce], Flynn, [drummer Dave] McClain, and now Demmel — held equal 25% shares in MH from approximately late 2002 until February 2013.

"While early on, each of the partners had equal rights in the management and conduct of MH business, Flynn, with the help of Huston, began making unilateral decisions without involving the other partners, essentially usurping control of the partnership.

"Despite the fact that Huston received 10% of the band's gross income, he failed to ensure that the members of the band made even close to his 10% cut."

Duce alleges that Nuclear Blast, Flynn and Huston "wrongfully and intentionally conspired to expel and then did expel [Adam] from the band prior to signing the new record deal in an attempt to preclude [Duce] from enjoying the profits of the new record deal. As a direct, proximate result of these actions, [Duce] has been damaged in an amount to be proven at trial, but in any event in excess of $800,000," the complaint states.

"Therein, Flynn stated, inter alia, 'We may have fired Adam on 2-11-13, but Adam quit MACHINE HEAD well over a decade ago. He just never bothered to tell anyone ... but we all knew it.' Flynn went on further in the diary entry, continuing to say about plaintiff, 'No matter how un-happy [sic] or fed up he got, quitting the band would be seen as 'losing' or a 'failure.' Truth be told, he was sick of it. Sick of touring, sick of recording, sick of practicing, sick of looking at album artwork, sick of being-on-a-team-but-never-getting-the-ball, sick of yearning-for-the-honeymoon-to-resume when 20 years deep it never does. Sick of never quite hitting the big-time, sick of carving the niche ... sick of caring.'" (Ellipses in complaint.)

Adam claims that Flynn's "diary entry was libelous per se in that in contained untrue statements made to third parties that tended to harm [Duce] in his reputation and occupation." Duce adds that "Flynn published this diary entry without making a reasonable effort to ascertain the truthfulness of its contents." In addition, "Flynn was not privileged to make such statements in the diary entry. As a direct, proximate result of this diary entry, [Duce] has been damaged in an amount to be proven at trial, but in any event in excess of $1,000,000."

Duce, who still holds interest in the band's partnership and company, claims that no agreement was ever made about his share of future royalties and profits. He says the other bandmembers "simply kicked him out of the band and presumed he would forget about over two decades of hard work, dedication, and effort he put into the Band." Duce also says his likeness is used on the band's web site and in promotions without his authorization.

Adam's replacement, Jared MacEachern, made his live debut with MACHINE HEAD on June 24, 2013 in Spokane, Washington. 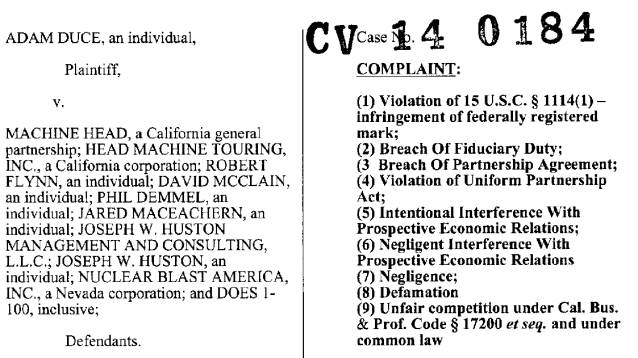