As part of this year's Record Store Day on April 19, San Francisco Bay Area metallers MACHINE HEAD will release a 10-inch vinyl single, with the A-side containing the "demo" version of a new song, "Killers & Kings". The B-side will be a cover version of the track "Our Darkest Days" from one of MACHINE HEAD's favorite bands, IGNITE.

The cover artwork for the "Killers & Kings" single can be seen below. Also available is video footage of MACHINE HEAD members Phil Demmel (guitar), Dave McClain (drums) and Jared MacEachern (bass) laying down backing vocals on the "Our Darkest Days" cover version.

Says MACHINE HEAD guitarist/vocalist Robb Flynn: "I remember growing up in the thrash scene and always wanting to hear the demo version of songs. You searched them out. Thankfully, my buddy Jim was a big 'tape trader,' and through trading, we had both METALLICA demos, EXODUS demos, bootlegs of songs sometimes 'years' before they came out.

"I knew how to play every note of 'Pleasure Of The Flesh' by EXODUS easily two years before the record was out. I had SLAYER's 'Reign In Blood' three months before it came out. I remember it still had the hi-hat counts starting the songs!!

"My friends and I would debate the merits of each (the demo was always better, LOL!).

"It's so much cooler to hear it BEFORE the album is out!

"So we're gonna do that for you.

"I can't wait for you guys to hear this stuff. Then you can debate it, haha!"

MACHINE HEAD will enter the studio in February to begin recording its new album for a late summer release via the band's new label, Nuclear Blast Entertainment. Other tentative songtitles set to appear on the CD include "Beneath The Silt", "Ojos De La Muerte", "Sail Into The Black" and "Night Of The Long Knives".

Says Flynn: "The new stuff is turning out better than anyone expected.

"We had THE breakthrough with the song formerly known as 'Back From The Grave'.

"I'd been working with the string section that played on 'Locust', Quartet Rogue, as well as multi-instrumentalist / keyboardist Rhys Fulber, and to quote [METALLICA drummer] Lars Ulrich (who was actually quoting Robert Trujillo), 'We're on some NEXT-LEVEL shit!!!'

"With that one song getting finished, I could totally see where the whole record is going. It opened up before my eyes.

"Nothing short of exciting!!!"

Speaking to U.K.'s Metal Hammer magazine, Flynn stated about the band's new material: "It sounds like MACHINE HEAD! It's definitely moving forward, which I feel like we're probably always gonna do.

Regarding whether the songwriting process comes more easily after more than two decades as a band, Flynn said: "I just try and do my thing. With this record in particular, I've tried to discipline myself more with routine, writing a little bit every day, but for months I was in a riff rut. Every riff I wrote fuckin' sucked! Then we took a two-week break and I was writing my Facebook journals about the 'Through The Ashes Of Empires' [MACHINE HEAD's 2003 album] story, and that cleared my head. At the end of those two weeks, the floodgates opened and all hell of riffs poured out. I was so stoked! This torrent of riffs, this molten hot lava, was at my fingertips. It's such a good feeling."

Flynn also revealed that MACHINE HEAD has "definitely got some ideas" for the artwork and imagery for the band's new album, but added: "It's weird, though, because who the fuck even buys albums anymore?

"An album cover is a necessary thing but for so many people it's justa little one-and-a-half-inch square on an iPhone.

"We're going to have a lot of worldwide special editions, so for the people who are still into that stuff, we'll have some next-level shit. Especially with our new label, Nuclear Blast, they can do all of that stuff. They're not afraid to do all these crazy, over-the-top special-edition things and big two-foot metal cases and all that.

"I'm a super-nerd collector and that shit rules to me!" 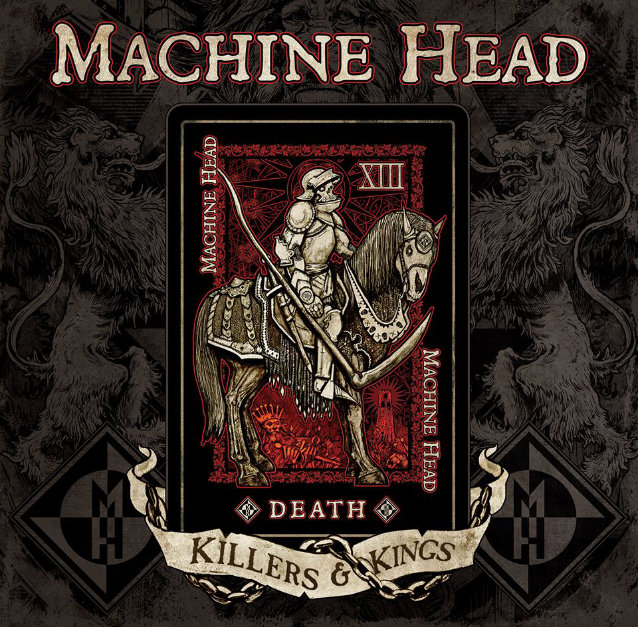