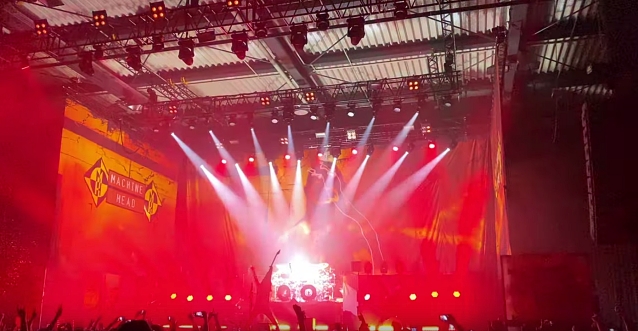 MACHINE HEAD kicked off the first leg of its 25th-anniversary tour for the band's classic debut, "Burn My Eyes", Saturday night (October 5) in Freiburg, Germany.

MACHINE HEAD's setlist for the Freiburg show was as follows:

Prior to the tour's launch, Kiełtyka stated about his new gig: "It's a huge honor to be able to play at the same stage with the mighty MACHINE HEAD. I grew up on their music and when I heard I will join them on this tour, I was literally stoked!

"That will be definitely a huge lesson and experience for me to be a part of such a professional team."

Alston commented: "I'm honored that I will be playing drums for MACHINE HEAD for the next world tour cycle alongside Chris Kontos on their 'Burn My Eyes' 25th-anniversary tour.

"It was a pleasure working for MH over last year's world tour, but now having the opportunity to be playing their songs is something I never would have imagined while growing up and listening to their music."