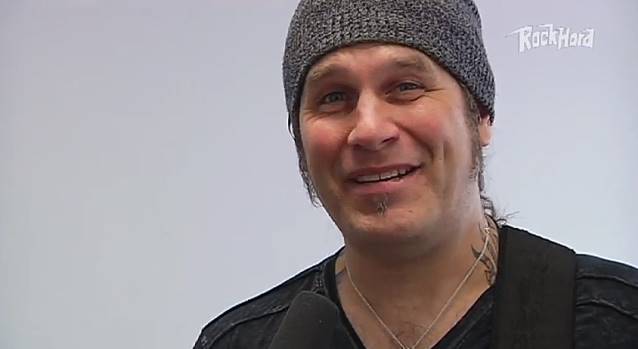 Rock Hard conducted an interview with MACHINE HEAD guitarist Phil Demmel at the Musikmesse Frankfurt 2013 fair, which took place April 10-13 in Frankfurt, Germany. You can watch the chat below.

After over a year of dialogues with various record labels, MACHINE HEAD recently decided on a new home with the newly launched arm of Nuclear Blast Records, Nuclear Blast Entertainment, headed by the band's longtime friend and former Roadrunner A&R guru Monte Conner.

MACHINE HEAD will enter the studio in late October to begin recording its eighth album for an early 2014 release. Tentative songtitles set to appear on the CD include "Killers & Kings", "Beneath The Silt", "Ojos De La Muerte", "Sail Into The Black" and "Night Of The Long Knives".

MACHINE HEAD's most recent studio release, 2011's "Unto The Locust", entered The Billboard 200 chart at position No. 22 — putting them in the Top 25 for the first time in the band's history. The CD was the follow-up to the 2007 metal milestone "The Blackening", widely hailed as one of the finest metal albums of the last decade, which led the band to an extensive three-year tour, sharing the stage with such heavy hitters as SLIPKNOT and METALLICA.