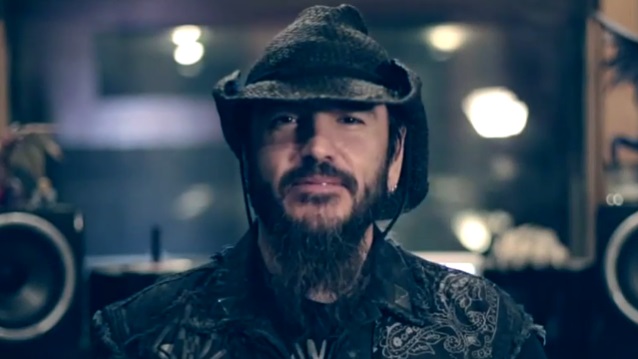 The fourth in a series of short segments regarding the production side of making MACHINE HEAD's new CD can be seen below.

As previously reported, MACHINE HEAD has tapped Brazilian artist Marcelo Vasco (BELPHEGOR, EINHERJER, DIMMU BORGIR, THE FACELESS, NOCTEM, KEEP OF KALESSIN, BORKNAGAR) to handle the artwork for the band's much-anticipated new album, due before the end of the year via Nuclear Blast. MACHINE HEAD frontman Robb Flynn said: "We got turned on to Marcelo's work through Gerardo [Martinez] at Nuclear Blast and let me tell you… this kid has delivered some fucking glory! He took the updated MH 'Lion Crest' that Rafal Wechterowicz (we call him Raf for short) had designed with us, and added this whole other dark trip to it. We've decided to base the album package off of an old Alchemy book, with aged, sepia-toned pages on the insides, alchemy wood-cuts."

Flynn continued: "As we talked about before, one of the things we were so excited to sign with Nuclear Blast about was the next-level, special packages they do for their bands. This MACHINE HEAD setup may be their biggest yet! Just the album alone will come in deluxe CD, vinyl gatefold, and the piece-de-résistance, a red foil and leatherbound 48-page media book with CD. Some album bundles will come with a hard resin MACHINE HEAD diamond logo around the media book. There will be something akin to an 'ultra bundle' as well, which will include a completely custom Epiphone guitar (with the new lion crest artwork) courtesy of Epiphone guitars."

Tentative songtitles set to appear on the new MACHINE HEAD album include "Killers & Kings", "Beneath The Silt", "Eyes Of The Dead" (formerly "Ojos De La Muerte"), "Sail Into The Black", "How We Die" and "Night Of The Long Knives".

Speaking to U.K.'s Metal Hammer magazine, Flynn stated about the band's upcoming CD: "It sounds like MACHINE HEAD! It's definitely moving forward, which I feel like we're probably always gonna do.

Regarding some of the specific tracks and the lyrical themes covered on the new album, Flynn said: "I've got some pretty cool lyrics ready. There's a song called 'Night Of The Long Knives', and it's pretty fucked! It's about the Manson murders, and the lyrics are really dark and vicious.