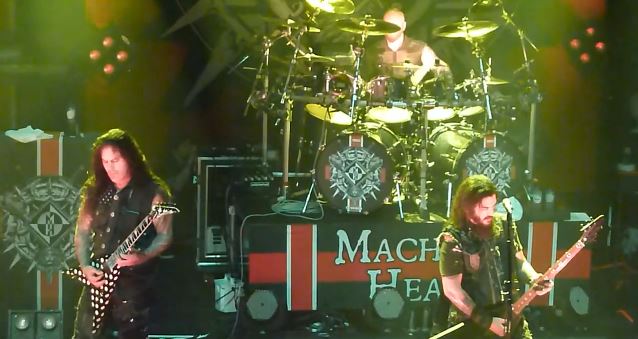 Fan-filmed video footage of MACHINE HEAD's August 6 performance at Hedon in Zwolle, The Netherlands can be seen below.

The final mix for the follow-up to 2011's "Unto The Locust" is being handled by longtime MACHINE HEAD producer Colin Richardson (BULLET FOR MY VALENTINE, SLIPKNOT, FEAR FACTORY, TRIVIUM).

"There's definitely a lot of urgency on this record," MACHINE HEAD frontman Robb Flynn told Metal Hammer magazine. "It's a really heavy record arid there's a dark and evil vibe to a lot of it, but I feel like there's more of a rock vibe in there too. It's stripped down at times, and I like that. I think that sense of urgency has carried over from the demos we did, which were all done very quickly and spontaneously. We tried to keep that spontaneous vibe on the album."