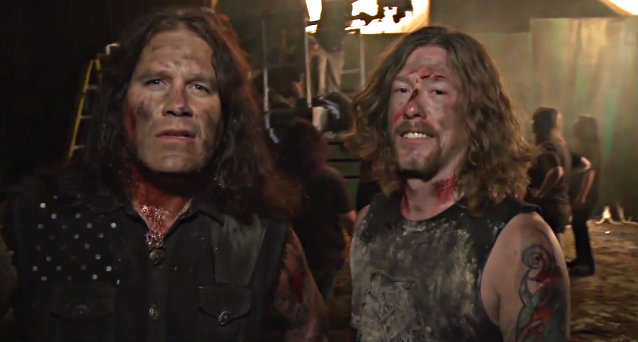 Behind-the-scenes footage from the making of "Now We Die", the new video from San Francisco Bay Area metallers MACHINE HEAD, can be seen below. The clip was filmed on October 3 in Oakland, California with director Mike Sloat, who has previously worked with TESTAMENT and HATRIOT.

"Now We Die" is taken from MACHINE HEAD's new album, "Bloodstone & Diamonds", which sold around 18,200 copies in the United States in its first week of release to debut at position No. 21 on The Billboard 200 chart. Released on November 10 via Nuclear Blast Entertainment, the CD was produced by MACHINE HEAD frontman Robb Flynn and Juan Urteaga, and like the last seven of eight MACHINE HEAD albums, was masterfully mixed by Colin Richardson. Additional tracking, editing, and mixing was done with Andy Sneap (MEGADETH, EXODUS, TESTAMENT, ARCH ENEMY) and Steve Lagudi.