Many more are coming, but since word got out about the first show of the tour, Tichy and Sutton decided to let out all the dates confirmed and follow it up with the rest very shortly.

Tichy said: "I love Randy Rhoads! He came into my life right at the same time I was learning guitar: 1980. He made me want to learn every note he played. I was already a drummer, but the guitar was right there with the drums, and a lot of that initial inspiration came from Randy's playing on 'Blizzard Of Ozz'. I didn't know what I was doing, but I really wanted to play like Randy Rhoads."

He continued, "I'm so psyched to do this 'Randy Rhoads Remembered: Rhoads Across America' tour! A bunch of buds throwing down together for a few hours a night in celebration of all things Randy Rhoads, 'Blizzard' and 'Diary' is definitely one tour I want to be a part of. Plus, I get to lock up with my friend, the bass legend Rudy Sarzo all night. Wait… let's not forget… this is the same bass legend I heard on 'King Biscuit Flower Hour' in 1981 with Randy, Ozzy Osbourne, Tommy Aldridge and Don Airey. That live concert absolutely floored me. So Google up the web site of the venue closest to you and grab some tickets! This is a show you won't want to miss as there is nothing else like it. Every song from 'Blizzard Of Ozz' and 'Diary Of A Madman' is performed, along with a couple QUIET RIOT classics and a Rhoads 'tribute' version of a SABBATH tune or two." 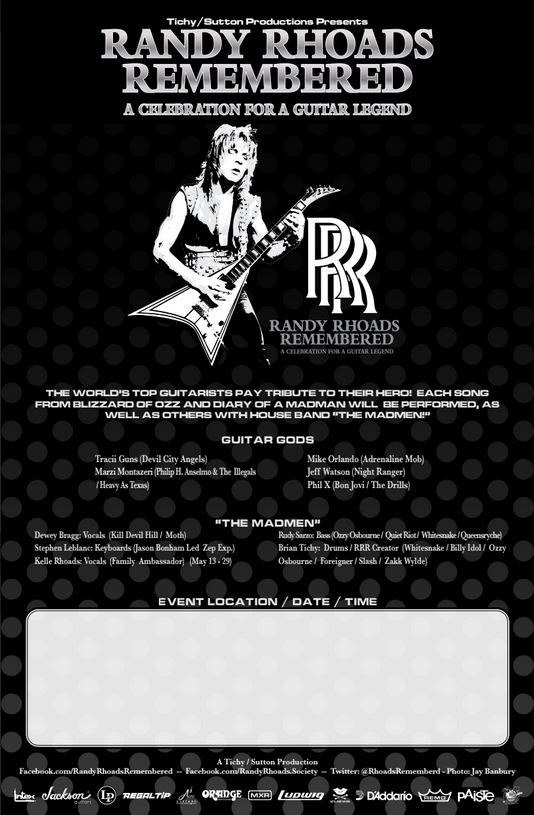