"Nearly a quarter of a century after they dominated the charts, bands like MÖTLEY CRÜE, TWISTED SISTER and WHITESNAKE still have a loyal audience," says "Hair Apparent" executive producer Kim Mulligan. "Whether the critics want to acknowledge it or not, it's obvious the enduring popularity of these bands must have a little something to do with the quality of their songs. It's not easy to strike a common chord with millions of people worldwide or else everyone would have done it, right?"

The concept behind "Hair Apparent" was to present the songs in a variety of musical genres and let them stand on their own. The musicians on "Hair Apparent" are not covering these songs; they are re-interpreting them. "Stripped of the hairspray, the spandex, the videos and the excessive behavior, these are really solid songs and well worth repeated listening," Mulligan adds.

"These artists turned these songs upside down and inside out. They're really nothing like the original versions," says Keith Roth, who is also one of "Hair Apparent"'s executive producers. "'Hair Apparent' puts a whole new spin on these 80s classics," Roth explains. Keith also appears on several tracks on "Hair Apparent", including the FASTER PUSSYCAT song "Babylon", covered by BAD BISCUT (who briefly reunited to record this version).

For more information and to order a copy, visit www.mainmanrecords.com. 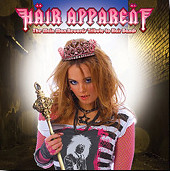