MÖTLEY CRÜE announced the lineup of Crüe Fest 2, the sophomore outing of the band's summer festival tour, at a press conference on Monday afternoon (March 16) in New York City at the studios of the Fuse music channel.

Video footage of the press conference can be viewed below.

Crüe Fest 2 will feature performances by the following artists:

In addition to announcing the lineup, the CRÜE debuted a new music video featuring members of all five Crüe Fest 2 bands performing the single "White Trash Circus". During the announcement, MÖTLEY CRÜE was joined on stage by Sully Erna of GODSMACK, Tyler Connolly of THEORY OF A DEADMAN, Ryan McCombs ofDROWNING POOL and John Allen of CHARM CITY DEVILS. The single of this track featuring MÖTLEY CRÜE with these vocalists is available to radio right now.

As previously reported, the CRÜE will also perform its classic 1989 album, "Dr. Feelgood", in its entirety on the tour to celebrate the record's 20th anniversary.

"We had talked about doing 'Dr. Feelgood' in its entirety… well, we had actually wrestled with that, 'Shout at the Devil', 'Girls, Girls, Girls', and when we decided on 'Feelgood', it was only after that that we realized it was 20 years," bassist Nikki Sixx said. "Looks like a big master plan, but it wasn't."

The CRÜE members were asked during the press conference if they think it's difficult to go on tour with the economy in poor shape.

"On the first Crüe Fest, the economy was pretty much the same as it is now, and it didn’t seem like it affected sales at all," said frontman Vince Neil. "I think people still want to go out and have a good time, listening to some good rock music, and maybe forget about the shitty economy, have a couple of beers, and let loose."

"When the economy goes to shit, entertainment is the one steady," added Nikki Sixx. "That and alcohol. Ozzfest also paved the way for us to think about what we wanted to do in the future, and I'm excited to see that it's had its run and it did what it did for a lot of fans, and hopefully, we can do the same thing."

Crüe Fest 2, produced by Live Nation and kicking off on July 19 in Camden, NJ tours across North America and concludes on September 5 in Darien Lake, NY. Select dates go on sale to the public on March 20, the remainder go on sale March 21.

MÖTLEY CRÜE's Nikki Sixx says, "This is what we imagined when we came up with the idea of Crüe Fest last summer — putting together the most kick-ass bands on one bill for a day of rock. All of the bands on this tour compliment the others — musically, theatrically and passionately."

Imeem will be the online partner for Crüe Fest 2, starting on March 17 with heavy promotion on imeem.com, and constant information updated on www.imeem.com/cruefest2. Once a week, brand new content from the tour will debut on Imeem, including playlist, video, and audio content, and will be cross promoted across Imeem and band-branded assets. 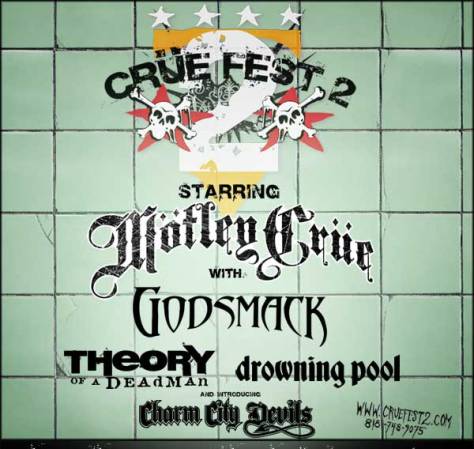