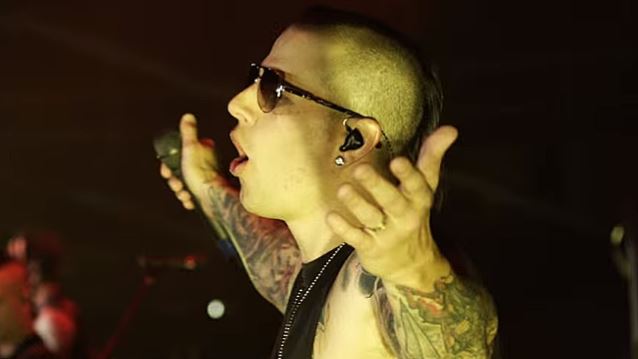 On August 23, AVENGED SEVENFOLD singer M. Shadows was interviewed on the WGRD radio station in Grand Rapids, Michigan. You can now listen to the chat below. A couple of excerpts follow (transcribed by BLABBERMOUTH.NET).

On the status of songwriting and recording sessions for AVENGED SEVENFOLD's next album:

M. Shadows: "Yeah, we're very wishy-washy. We're writing, we've been throwing stuff around. You know, we've been working, and that's all I can really say about it. I think there's a lot of speculation online, and we're just kind of leaving it that way. But when there's something to be heard, we'll let the world know. But right now, we're just still working on stuff."

On the visual presentation for AVENGED SEVENFOLD's upcoming live shows, considering the fact that the band's new album hasn't been released yet:

M. Shadows: "Right now, on this tour, we're thinking about going with a really clean, really big look. And since 'Hail To The King' is three years old, it really isn't appropriate to bring out 'Hail To The King'-themed stuff. So I think what we're gonna start doing is we'vee been, in rehearsal, bringing out a lot of older things that people haven't necessarily heard in a long time, or things we've never played. Like, we debuted a song called 'Planets' the other night, and we've been playing a song called 'Acid Rain'. And we wanna start bringing out some older stuff that people haven't necessarily heard. So we wanna pack this setlist with stuff that isn't necessarily all the hits and just kind of come up with a big look, production-wise, while we work on building something much bigger for the future and for the next few runs."

M. Shadows: "Well, the process was really easy, because… Well, first off, we had to keep it secret, because we had to respect BAD RELIGION and what he was gonna have to do with telling them that he decided that he wanted to play with us. And we're huge fans of BAD RELIGION; they're one of our favorite bands growing up, and they still are — they still put out such great music. And so, for us, it was about just working with him for a year before we even announced it, 'cause we wanted to make sure he was the right guy. But deep down, we already knew. We've known Brooks for years and years and years, and we knew he was just a phenomenal drummer. We knew that there was no way he was gonna have trouble recreating The Rev's parts and Mike Portnoy's parts. So, basically, for us, it was about writing with him, and writing songs with him, to see how that went, before we decided to pull the trigger. And so, once we did that, we just knew… I mean, you can show that guy a song and he can learn it in three listens; he's that good of a drummer. So he's probably more prepared than we are, honestly, on some of these old songs, especially for the guitar players — they're playing all these duels and all these solos. And then Brooks, he's got it down. You can show him and song and he can learn it within a day, which is cool."

AVENGED SEVENFOLD played a free show in Minneapolis last Thursday night (August 18) as a warm-up for its gig with METALLICA at the city's brand new U.S. Bank Stadium on Saturday (August 20). The band decided to play for 1,500 lucky fans on a first-come-first-served basis at the city's First Avenue venue to "get the blood flowing" ahead of Saturday's sold-out concert, which also featured VOLBEAT on the bill.

AVENGED SEVENFOLD's show at First Avenue marked the band's appearance with Wackerman, who joined AVENGED last year after the departure of Arin Ilejay.

AVENGED SEVENFOLD has been recording its seventh studio album, but it's not clear when the disc will be released since the band announced earlier this year that it was attempting to sever its contract with Warner Bros. Records.

AVENGED SEVENFOLD said at the time that "none of the senior management or A&R executives who were at the company and responsible for signing us are still there."

The band's previous two releases, 2013's "Hail To The King" and 2010's "Nightmare", both topped the Billboard album chart.