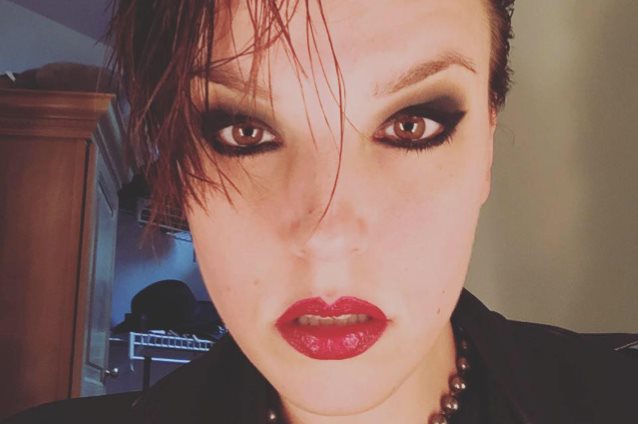 HALESTORM frontwoman Lzzy Hale was recently interviewed by Wes Styles of the 97.7 WQLZ radio station. You can now listen to the chat using the SoundCloud widget below. A couple of excerpts follow (transcribed by BLABBERMOUTH.NET).

On the progress of the songwriting and recording sessions for HALESTORM's follow-up to 2015's "Into The Wild Life" album:

Lzzy: "We've been just basically going down this creative rabbit hole, and it's been awesome, actually. I keep calling it the long road to the beginning, because we literally have been cracking the same jokes that were making in, like, 2006, and it feels like we're in our parents' basement again. It's pretty sweet. Yeah, we're just gearing up to do it all over again, and [we have] really exciting tunes. So I'm stoked to actually get this to the ending result here."

On whether HALESTORM has begun recording the new album yet or if it is still in the "pre-production" phase:

Lzzy: "We're about halfway. We have a lot of tracks. We've been kind of doing both [recording and working on pre-production]. We've been writing in my personal studio, at my house, and then we've been going into an actual studio with a producer and doing kind of pre-pro as we go along, which we've never really done. 'Cause usually, it's, like, 'Okay, we have all the songs together, and then we'll go in the studio.' And this time we have like half-songs and then we go in the studio and we finish them. We have some keeper song takes and there's maybe some vocal or guitar takes that we won't redo later, but, yeah, it's everything all at once at the same time, so we're multitasking."

On whether there is a timetable for the release of the next HALESTORM album:

Lzzy: "We don't have a timetable right now, which is really scary. This is literally something that we discussed with our label. Our A&R guy, who is the best guy ever and is also very organized and keeps a schedule, he came over to my house and he was, like, 'So my agenda is I don't have an agenda and I just want you to go do your thing. You've never really had the time to do that. So go and just be creative.' And I'm, like, 'Are you sick? What's happening?' [Laughs] So it's been interesting to have that type of freedom. At the same time, we're making our own kind of schedule so that we keep everything on point, because we'll lose our minds otherwise."

On the recent passing of SOUNDGARDEN frontman Chris Cornell:

Lzzy: "Honestly, SOUNDGARDEN was a huge building block with my bandmates, 'cause that band… that kind of knocked me out of my '80s obsession. That was the band that brought me into the '90s and the magic of that. I remember… I think it was a couple of days after I met Joe [Hottinger, HALESTORM guitarist], he ended up giving me — back when you used to burn CDs — he gave me this kind of mixed tape of… there was 'Down On The Upside' and there was some stuff from 'Superunknown', and it blew my freaking mind, because I hadn't really dug into that band yet. And it literally… I think it helped shape our HALESTORM sound. This was in 2003 when we started kind of really getting it together.

"Nobody approached the microphone like he did. There was just this effortless… and all these different characters that he developed over records, which is something I always kind of go to. We're actually doing that in the studio now — we're, like, 'This about all the characters that Chris Cornell had and how he used them in every song.' There were a couple of different voices. And we discussed that even before he passed, we discussed this over the years.

"It's just so sad to lose another one. He's such a great talent, and it's so incredibly heartbreaking that he's gone now."

HALESTORM's last album, 2015's "Into The Wild Life", was criticized by some fans for veering too far into pop music territory.