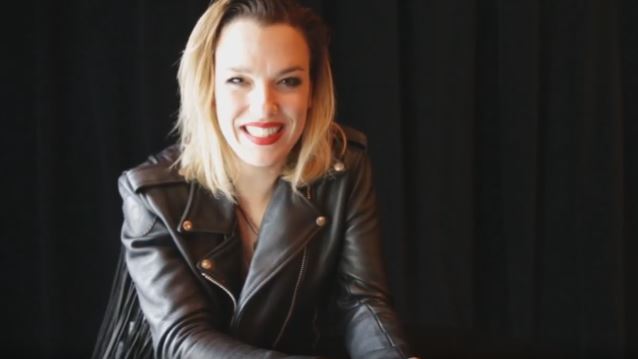 Musik Universe conducted an interview with HALESTORM frontwoman Lzzy Hale prior to the band's October 28, 2016 show at the Métropolis in Montreal, Quebec, Canada. You can watch the full chat below. A few excerpts follow (transcribed by BLABBERMOUTH.NET).

Lzzy: "She's someone I grew up with and I say this with the utmost respect, but I put her in this group of what I call the 'Four Mothers of Rock and Roll.' There's Lita Ford, obviously her counterpart Joan Jett, HEART, and Pat Benatar, and Janis Joplin. These women who all came before me when there was no rulebook. There was no path. I was lucky enough to look at people like Lita and go, 'See, this is possible and she did it.' But when Lita — we've been talking about this — she was a young girl, there was no path. There was no, 'Oh, that has been done before.' She literally had to kick the door down. It's just amazing. She still looks incredible and rocks out and gets into those red leather pants every single day. It's really amazing to see. It's amazing to see a girl that has literally lived her life on the road since she was a teenager and is still doing it. I see myself in the future and if I'm ever like 'Oh man, my back' or I'm too tired, then what is my excuse? That woman does it every single day."

On her recent home purchase in Nashville, Tennessee:

Lzzy: "It was on accident. I had gone there a couple of years ago to write with some people because there's an amazing writing community out there, and to get my chops up. I ended up meeting this amazing rock and roll community out there. A lot of us became friends. But I was still, like, 'I'm still renting and or when I can, I'll stay with my parents. I can't move anywhere.' It was always in the back of my mind that if I were to move somewhere, it would be Nashville. A few years after that, we decided to move our gear and warehouse there because it's a nice, central location. All of the buses come out of there, and it saved us a bunch of money. Eventually, we were like 'Somebody should live there because all of our stuff is there.' I ended up renting out there for a little while and finally got a house. I don't know what it is, but the place got me."

On working with TRANS-SIBERIAN ORCHESTRA and DREAM THEATER:

Lzzy: "First of all, I was like, 'You know who I am?' It's so humbling. I loved working with TRANS-SIBERIAN ORCHESTRA and the main guy, Paul [O'Neill], he's such a sweetheart and just a wonderful person. He is made an empire for himself, but he is addicted to making people's day. I have never met a more generous person. Working with DREAM THEATER, when that came down the pike and when I heard they were looking for me, I was like, 'Seriously? That's amazing!' Out of everybody that they could have asked to sing on that track ['Our New World'], I was very humbled that they wanted me to do it. Whatever list I'm on, thank you for putting me on that list."

On her dream collaboration:

Lzzy: "On the classic rock side, I still have a dream singing with Ann Wilson from HEART. On the pop side, I think I would go with Pink or Lady Gaga. Just come to the dark side — it's cool. Distorted guitars."

On if working with people like Paul O'Neill and DREAM THEATER influence her approach in HALESTORM:

Lzzy: "Not so much in approach, but every time I got into the studio, I'm challenged to lend myself to a different project. It's their project. I want to do it just for them. It's not self-serving for me. I learn so much about myself and my own voice. Maybe discovering different gears that I didn't know I could use or haven't used before, so I end up maybe incorporating that into the next couple songs I write for the hell of it. But it's funny because the more I spread myself out, the more I appreciate my roots, too. It has an opposite effect. The last couple of songs that the guys and I have been jamming on, I don't want to give too much away, but we've been writing the most aggressive music we've ever written. Then considering we did a song with Lindsey Stirling which is more on the pop side, then DREAM THEATER, then a beautiful ballad with TRANS-SIBERIAN ORCHESTRA, considering that had a weird opposite effect is interesting. You can't really choose where the influence goes. You have to chase after what gets you excited. Right now that's what we're doing."

On how many HALESTORM songs are autobiographical:

Lzzy: "Nearly all of our songs are autobiographical, or, they're about my guy, or that something that one of my guys is going through or things that I observe. I think it's important, especially right now in our career to get closer to getting more honest. Not that we haven't been. On the first record, I remember being a little afraid to open up, or not comfortable enough to open up to everybody. Now after years and years of meeting people, the more honest I feel I get, the better response we end up getting, which I thought was going to be the opposite. Now, I'm going to let it all hang out."

HALESTORM is continuing to tour in support of its third album, "Into The Wild Life", which debuted at No. 5 on The Billboard 200 chart.