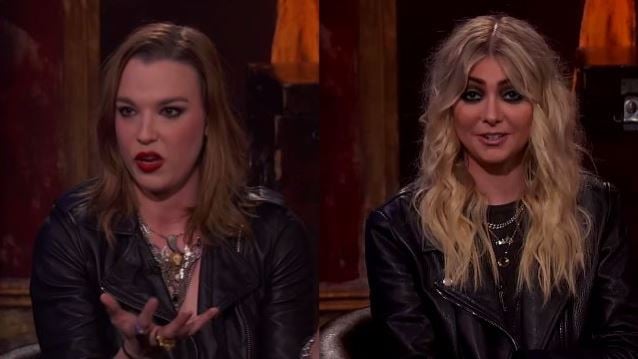 HALESTORM recently spent a few weeks the road with THE PRETTY RECKLESS and HALESTORM frontwoman Lzzy Hale praised THE PRETTY RECKLESS singer Taylor Momsen in a Louder Noise interview. Hale said (see video below): "Taylor Momsen, she is… We just had a tour with THE PRETTY RECKLESS… She's one of those true, just right-down-to-her-core rock and roll chick. It's an interesting perspective, because she's not doing it for the fame, 'cause she's already had that with her acting career, she's not doing it for the money, so she literally walks out there every day and just wants to rock. And it's really refreshing to see. With everybody, especially this day and age, everyone's, like, 'I don't know. I need a single, and I need money. I have a house. I need…' It's really neat to see her, more or less, just really just be herself out there, and I think that she's one of the few — male or female — that does that nowadays. And she's so consistent… I know she's 21. To be 21 again and finish a bottle of whisky and then go out there and sing amazing… I used to be able to do that. I can't anymore; don't challenge me — it's really messy. But [her] whole band was amazing. We had far too much fun with those guys — a lot of late-night hangs, a lot of sarcasm. It was a lot of fun."

Momsen appeared in various movies, commercials and TV shows since she was a child, and was best known for her role on the TV show "Gossip Girl". But she has not pursued any new acting gigs since recording two albums with THE PRETTY RECKLESS, including the recent "Going To Hell".

Hale was quick to dismiss any notions of a rivalry between her and Momsen in a West Virginia radio interview. She said: "It's not like that. Whatever that mentality is, that died out with the last generation." She added: "I don't know what it is about her, but she's a freakin' rock star, and I really enjoy listening and seeing the way that she carries herself. She's carrying that rock 'n' roll torch."

HALESTORM's third album, "Into The Wild Life", was released on April 14. The CD follows up HALESTORM's Grammy-winning 2012 sophomore effort, "The Strange Case Of…"