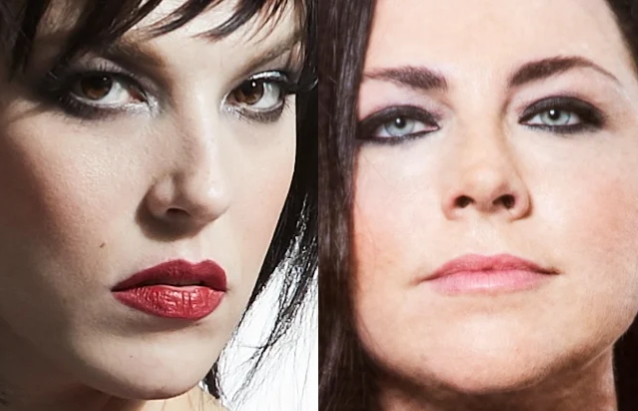 HALESTORM frontwoman Lzzy Hale says that she will vote against another four years of "hatred," "name calling," "fear mongering," "racism" and "childish leadership" in the upcoming presidential election.

"I'm not voting for blue over red.

"I'm not voting for MY team over YOUR team

"This is not a Republican vs Democrat election. THIS is a GOOD VS EVIL election

"Now is the time to abolish the wrong that we KNOW exists right NOW.

"THEN we will take the next step toward healing and CHANGE.

"Are you registered to vote?

"Make sure that you are and then make sure at least three of your friends and family are as well.

"NOW more than ever we must stand UNITED. All hands on deck! VOTE AGAINST!"

She added in a separate tweet: "To everyone worried about me or me losing followers... don't. My heart, soul, and music will be fine. I can live without the 'likes', and the approval of those who think that hate and inequality should rule the world. Can you? My life is Mine. I am not ruled by anyone but Me."

Hale's onetime touring mate and occasional collaborator, EVANESCENCE's Amy Lee, retweeted Lzzy's original message and wrote: "Courageous warrior sister, I stand beside you 100%. This is a fight for freedom. Vote for your life. #voteagainst #VoteHimOut2020"

In a 2018 interview with the Live 105 radio station in Halifax, Hale was asked if it was hard to avoid writing about politics on HALESTORM's latest album, "Vicious", in light of the current political and social climates in the U.S. "Absolutely," she responded. "We even said that early on, because there have been some people that have picked certain things out from our record that we weren't necessarily consciously trying to do. We kind of stay away from politics and religion; with those two things, you can't really win. So it's one of those things where we kind of stay away from it — we just wanna rock; that's all we wanna do. But it is really hard not to let that stuff soak in, because it's just there — always, especially nowadays. Whereas before, you could kind of ignore it — you're, like, 'Oh, people that are into politics, they're paying attention to that.' And now everybody's into it, and it affects so many different people, and it affects friendships. So, for us, our main goal is, like, 'All right, we can't necessarily escape it, but since we're in a position where people are going to listen to what we're doing, let's make sure we put out some empowerment, we put some positivity out there, because there's too much crap going on right now.' So that was kind of our m.o. But, yeah, it's definitely tough."

About a month before the most recent U.S. presidential election, Lzzy said that she was "into equality" and insisted that she couldn't "out of good conscience" vote for anybody who built his or her empire on "division and hate and inequality."

Although she initially said that she was a Bernie Sanders supporter, Lzzy later expressed concern that he would "die the first year in office" if he got into the White House. Hale went on to say that she would "definitely not" vote for Donald Trump, explaining that she has "just never been a fan."

This past May, Lee said that she was " angry, horrified" and "ashamed" over the murder of George Floyd in police custody as well as President Donald Trump's response to the subsequent protests and riots.

Just three months earlier, Lee opened up about her political views for the first time, explaining that she couldn't "stand by" and keep her mouth shut while her "country's freedom is taken away." He decision to speak out was apparently prompted by the GOP-controlled Senate's vote to acquit Trump on both articles of impeachment without calling witnesses.

She wrote at the time: "I do not accept lying, cheating or bullying from my government… Accepting this abuse says it's okay for our leaders to lie to us, cheat on us, make decisions without our input, and silence us when we try to speak up. This isn't about your policies or beliefs, it's about our freedom."

Lee added: "I will never bow down to a dictator."

To everyone worried about me or me losing followers... don’t. My heart, soul, and music will be fine. I can live without the “likes”, and the approval of those who think that hate and inequality should rule the world. Can you? My life is Mine. I am not ruled by anyone but Me.

Courageous warrior sister, I stand beside you 100%. This is a fight for freedom. Vote for your life. #voteagainst #VoteHimOut2020 https://t.co/PVBJs2Jrc9