Seventh Rule Recordings has announced the signing of Chicago's blackened sludge tribe LORD MANTIS. The band features members of Seventh Rule labelmates INDIAN and avant black metallers AVICHI, as well as an ex-member of NACHTMYSTIUM. The 'MANTIS wields a "bludgeoning sound" with "an extra layer of darkness," in the words of the U.K.'s Rock Sound — a sonic descent into hell, akin to NEUROSIS, ZENI GEVA, and even IMMOLATION.

Seventh Rule will release LORD MANTIS' full-length debut, "Spawning The Nephilim", on April 28. The CD was recorded and mixed by Sanford Parker (THE GATES OF SLUMBER, LAIR OF THE MINOTAUR) and mastered by Collin Jordan (MINISTRY, PIGFACE).

Hear the aptly titled anthem "Lord Mantis" from the upcoming album on the band's MySpace page.

LORD MANTIS will be touring throughout 2009 and is expected to play shows with PLAGUE BRINGER and THE ATLAS MOTH, among others. 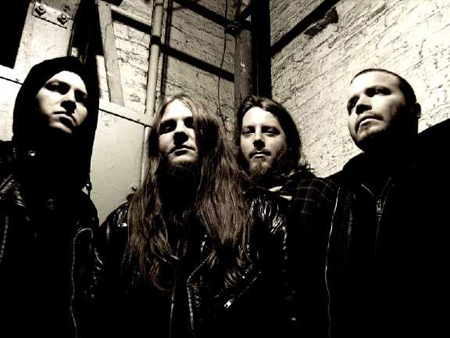