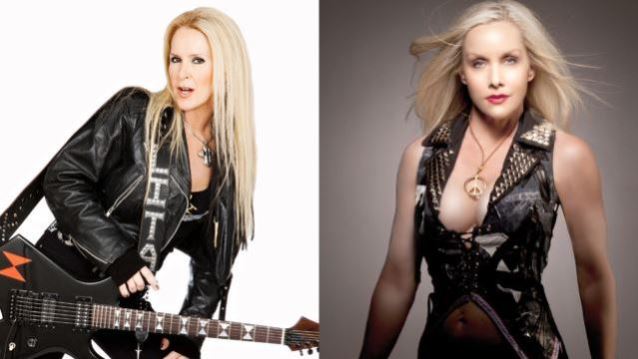 Speaking to Mike of PsychoBabbleTV.com at a recent tour stop in Chicago (see video below), Lita explained how the collaboration came about. "My old drummer called me, Rodger Carter, and he says: 'Lita, let's record a Christmas song,'" she began. "He's got his own studio; it's called the Doghouse. It's in Encino, California… Reseda. And it's a really nice studio. He said, 'Come over and let's record a Christmas single.' So I thought, 'OK. What do you wanna do? 'Jingle Bells'?' And he said, 'No. Let's write something new.' And I thought, 'OK.' So I got out a pen and paper, and I thought, 'Let's rock this Christmas down.' So we started writing this song called 'Rock This Christmas Down'. And this year, I got in touch with Cherie Currie, who I haven't spoke to in quite a long, long time, who was the lead singer for THE RUNAWAYS. And so it just so happened to be that she was on the phone just shortly after we had finished talking about recording this song. I said, 'Cherie, why don't you sing it with me?' So she flew in from this area, which she just played, and came straight from the airport to the studio, cut the vocal track, and we have a Christmas single with me and Cherie singing lead vocals."

In a 2012 interview with Metalshrine, Lita stated about the possibility of a RUNAWAYS reunion: "Cherie's all ready to do a RUNAWAYS reunion and I would love it and I think we should start writing songs and I think it would be great. I'm not sure what Joan [Jett] is doing right now. I don't know if she's in the studio or if she's touring, I'm not sure. I was in contact with her for a while and then all of a sudden she just disappeared. She's probably on tour, but I don't know and it really needs to come from Joan. I talk to Cherie all the time. I talk to Vicki [Blue; now known as Victory Tischler-Blue] all the time and I'm still good friends with Jackie [Fox], but we can't do it without Joan, you know. She's got to be a part of it and she's gotta want to be a part of it."

Lita last year filmed a video for the song "Mother" in Joshua Tree, California. Directing the clip was Ford's former THE RUNAWAYS bandmate Victory Tischler-Blue, whose film "Edgeplay" was based on her tenure in the 1970s all-girl teenage rock act.

Lita Ford will release a new live album, "The Bitch Is Back... Live", on October 28 via SPV/Steamhammer.