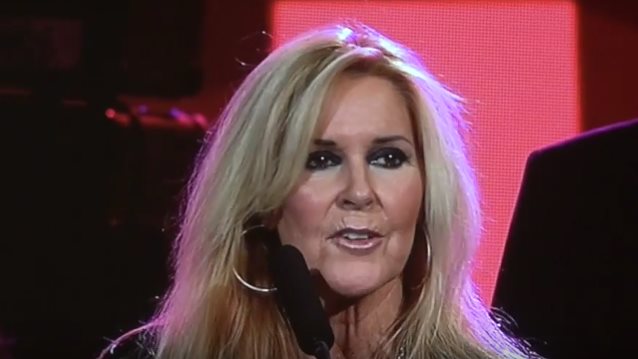 '80s hard rock queen Lita Ford says that she has "a lot of songs written" for her new studio album, to be released early next year. Helming the project once again is guitarist/producer Gary Hoey, who previously worked with Lita on 2012's "Living Like A Runaway" disc.

Speaking to Uber Rock's The Dark Queen at the HRH AOR festival, which was held earlier this month in North Wales, Ford stated about her plans for her next album (see video below): "We started writing. We've got a lot of songs written. We've just gotta get into the studio and now take them from the demo form and put them into the master form." She added: "We still have a little ways to go."

Lita also talked about her autobiography, "Lita Ford - Living Like A Runaway: A Memoir", which was released last year via Dey Street Books (formerly It Books), an imprint of HarperCollins Publishers. "It was really difficult to write," she said. "I had a couple of different co-authors that I was working with, and they weren't quite capturing my voice. It didn't sound like me, and they didn't picture things like I pictured them. And I thought, 'This isn't working, and it's not true. It's not right.' So I'd fire one, and I'd bring in somebody else, and they would do the same thing. They just couldn't understand; they didn't see things in the way that I saw things. So I would fire them. I went through different people. And finally I just said, 'Fuck it! I've gotta write this myself.' Because nobody gets it, I guess, because it was such an individual story, coming from someone who had never done this before, really, when you think about it. So I had taken an entire summer. I didn't take my bathrobe off, and I sat at home and I wrote the entire book by myself, along with a friend who was good on computer. So I would write the story, send it off to her, and she would insert it, and then we would send it off to HarperCollins. So it was good teamwork."