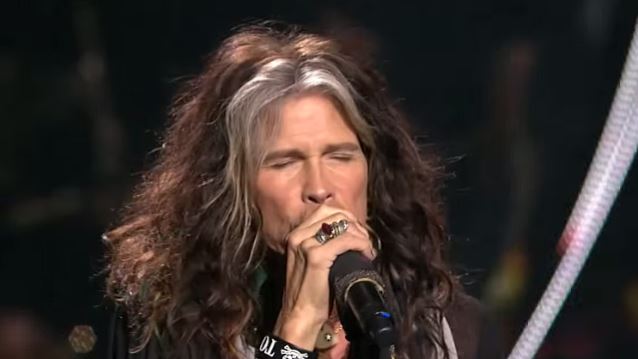 "Love Is Your Name", the first country single from AEROSMITH singer Steven Tyler, can be streamed using the widget below. Tyler, who recently signed to Dot Records underneath the Big Machine Label Group umbrella (Taylor Swift, Tim McGraw), issued the single across multiple media properties and is promoting the track with exclusive interviews and a live televised performance.

Tyler has revealed to USA Today that he won't get a chance to complete his solo album until after AEROSMITH finishes a two-month North American tour that begins June 13 in Glendale, Arizona.

"I've got to find time to come back and record these songs after the AEROSMITH tour," Tyler said. "But I flit from flower to flower, country to country, looking for good times and singing about the last time. That's what I'm putting into the country songs."

Released today (Wednesday, May 13), "Love Is Your Name" was recorded at the famed Blackbird Studios in Nashville with producer Dann Huff.

In a statement Tyler said that, "The first day in the studio I recorded a song that became my first single, and if 'Love is Your Name' then Nashville's my new girlfriend. I guess you could call that Beginner's Luck."

Tyler is promoting the song today with interviews on "CBS This Morning" and "Entertainment Tonight", and he will perform the track tonight on the season finale of Fox's "American Idol".

AEROSMITH's summer tour includes a performance at the Pro Football Hall of Fame Concert For Legends on August 7 in Canton, Ohio.