"The real point of this record, and the lyrics for 'Tenderness', is not for me to be some damn politician or some other voice to add to what is already way too much noise," McKagan said in a statement.

"This is a song of unity and peace… and I want this record to be a meditation and to bring maybe some healing, if that is not too high-handed or lofty of a goal," he continued. "I can use what marginal voice I have as an artist, to hopefully help arrest what seems like a fall. As a father, I must say and do something now… because I love my girls and my wife, and I love my country, and I feel I must be strong and use my voice now, do it while I am able, or perhaps never get a chance ever again."

Duff recently announced his first solo tour dates of 2019, which will take place this spring.

Joining McKagan at the two shows — May 31 at the Theatre Of The Living Arts in Philadelphia, Pennsylvania and May 31 at City Winery in Washington D.C. — will be singer-songwriter Shooter Jennings, who produced Duff's new disc.

McKagan and Jennings began recording the album back in March 2018. The two worked out of Station House studios, located in Echo Park, California, writing and recording in between McKagan's tour with seminal rock band GUNS N' ROSES and the release of Jennings's eponymous album, "Shooter".

"From the start of the development of this record, 'Tenderness' stood out as a focal point," says Jennings. "I was almost scared to cut it too early — before we had really mined the sound of the album. I knew we had one shot to do it right with feeling. After it was done and we had a first mix, I wrote Duff and said, 'This song has to come out right now!' It has a simple message of celebrating life and each other and for everyone to take it easy on one another. It offered an empathetic solution for a divisive time in the world: Tenderness."

Speaking to Thomann Music at this year's NAMM show in Anaheim, California, Duff said about the genesis of his new solo record: "I've written a couple of books. And this last tour that I was just on was two and a half years [long], and we traveled around the world, like, four times. And it was a very interesting time. The last two and a half years has been interesting in England, interesting in America [and] interesting in the rest of the rest of the world as well. And I'm a history reader. All I do, really, is just read every night. I like being informed, I like traveling, talking to people and knowing what the lay of the land is wherever I go. And it's evolved over the 30 years that I've been traveling. It interests me. Instead of writing a book about that, which is what I was thinking of doing, especially the climate that we've evolved into — sort of more divided… This has happened many times before. History repeats itself, but people get pretty [worked] up not realizing this has happened before.

"So I wrote these little vignettes that were gonna be starts of stories I was gonna write about, but they became songs," he continued. "[They're] kind of observational songs… And I'm really proud of it. It's like another book for me. It's a launching of a book as opposed to… It's not a rock record, so I don't know if people will be surprised or not. But I thought it was important for me now as a father and a citizen…

"I've read so many goddamn books on history, and I still do, that I thought maybe it's time for me to just point out some things that I've observed," Duff added. "Not pointing fingers at anybody, 'cause that does no good. I feel like I have a voice that I can kind of say, 'This has happened before. Here's what happened then. It's happening again. Let's not fall for it again.'"

McKagan went on to say that he played acoustic guitar and bass on the record, with accompaniment from Shooter's band.

When Duff's new solo album was first announced in December, Jennings said that he "felt it was a really important record that had to be heard. The songs have so much heart and are so musical that I could just hear all the arrangements immediately and I could really feel them," he said.

About his connection to McKagan, Jennings said: "I met Duff right after I moved to Los Angeles nearly twenty years ago. I was such a massive GUNS N' ROSES fan when I was younger. I'd say that they had a lot to do with me even moving to L.A. But there was some kind of magnetic force I guess that kept us orbiting each other over the years. When the idea of collaborating with him on this album came up, I was very eager to get the job as producer. I felt like the music this man made was part of the fabric of my own musical identity and that I would really love building a record with him. Once we sat down and started going over the songs he had, I instantly knew that the two of us were going to be a great fit together." 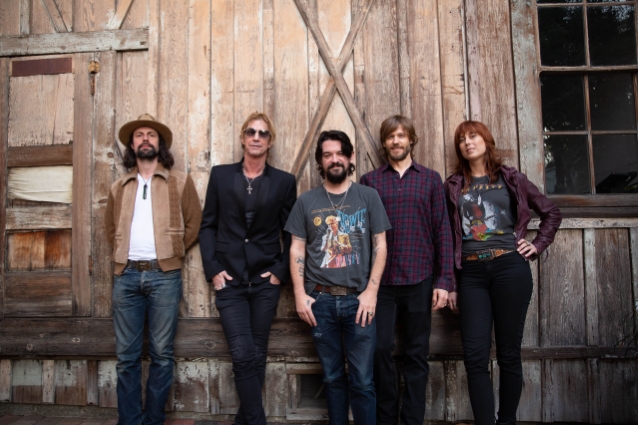