Guitar Center has announce the upcoming induction of Grammy Award-winning rock band LINKIN PARK into the retailer's historic RockWalk. The private, invite-only induction ceremony is set to take place on Wednesday, June 18 at 12 noon at Guitar Center's Hollywood location on Sunset Boulevard. Adding to the celebratory nature of the day, LINKIN PARK will release its highly anticipated new album, "The Hunting Party", on June 17.

"We're honored to have our music recognized by our peers," says Chester Bennington, lead vocalist of LINKIN PARK. "But to be added to Guitar Center's RockWalk on Sunset Blvd, right where we started, is pretty surreal. We're really grateful to be here alongside so many of the artists that inspired us."

"Innovative and influential. Those are the two major traits we look to honor with Guitar Center's RockWalk, and LINKIN PARK has them in spades," says Dave Weiderman, Chairman of Guitar Center's RockWalk. "Not only that, but they have one of the largest fan bases of any current rock group. It is due time they put their hands in some cement."

Guitar Center's RockWalk is dedicated to honoring those artists who have made a significant impact and lasting contribution to the growth and evolution of rock 'n' roll, blues and R&B. As the newest RockWalk inductees, LINKIN PARK's handprints will reside alongside the handprints, signatures, and faces of other equally accomplished musicians and innovators such as Eric Clapton, George Martin, Jimmy Page, IRON MAIDEN, Carlos Santana, Johnny Cash, VAN HALEN, AC/DC, AEROSMITH, Marvin Gaye, James Brown, B.B. King, Stevie Wonder, RUN-D.M.C. and QUEEN, among numerous others. 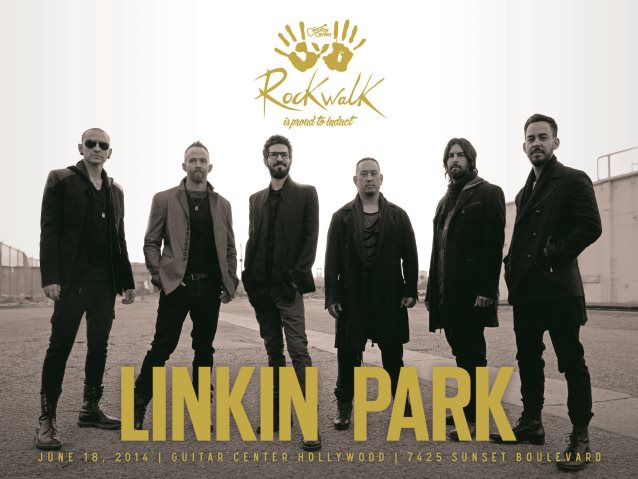