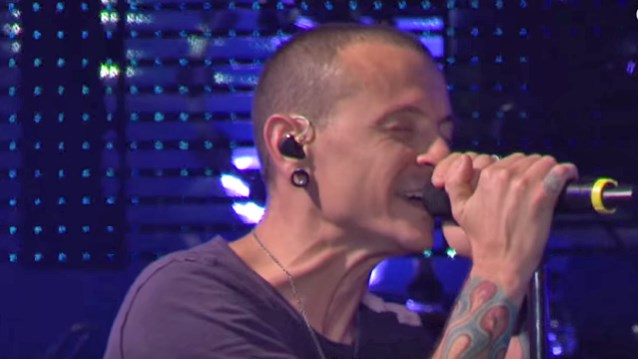 **UPDATE**: The remaining dates of LINKIN PARK's "The Hunting Party" tour have been canceled due to Bennington's leg injury. Chester says: "I'm really disappointed this injury has made it impossible to continue with this tour. The first couple shows were just magical. We will truly miss not being with our fans for the next few weeks. Hope to see you again soon."

LINKIN PARK has been forced to cancel its shows in Pittsburgh, Pennsylvania (January 20) and Albany, New York (January 21) due to a leg injury suffered by lead vocalist Chester Bennington. The singer, who requires immediate medical attention, says: "I need to take the proper time to assess the severity of my injury and apologize for any disappointment this has caused. I look forward to seeing you all again soon."

Fans can seek refunds at point of purchase.

LINKIN PARK's new album, "The Hunting Party", debuted at No. 3 on the Billboard album chart in June 2014 — the first time since the band's 2000 debut disc, "Hybrid Theory", that the group did not land at the top of the chart in its first week of sales.

"The Hunting Party" sold around 110,000 copies in the United States in its first week of release. The record arrived in stores via Machine Shop Recordings/Warner Bros.