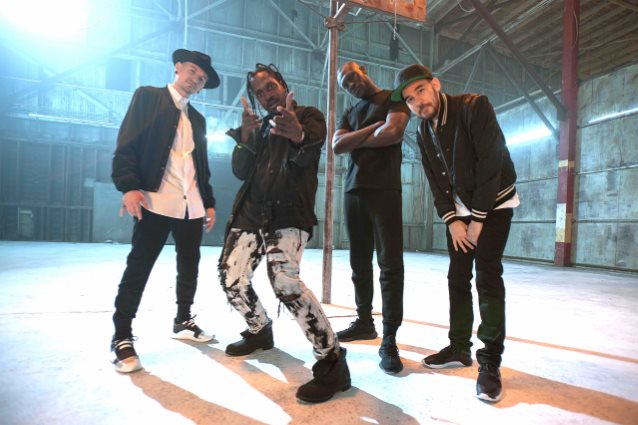 LINKIN PARK vocalist Chester Bennington recently defended the band against the backlash caused by the pop direction of "One More Light", which is due May 19. Speaking with Rock Sound, Bennington said that the group began writing pop songs even before recording its heavy 2014 album, "The Hunting Party". He explained: "We started down a pretty clear path of writing some pretty serious pop music. Mike [Shinoda, co-vocalist] was giving me litmus tests like, 'Hey, what would you say if I said let's do a collaboration with Katy Perry or Kelly Clarkson?' and I was like, 'Fuck yeah! I actually really like pop music.'"

Bennington continued: "It was just a test to see if I'd go, 'Absolutely not, that makes me want to puke' or if I'd be open to the idea, and I'm pretty much open to anything."

Bennington added that the group started taking risks as far as back as its third CD, "Minutes To Midnight", saying: "If the songs are great, that should be all that matters. We feel like we're pushing ourselves creatively… We like to really play with our palette and expand our abilities as songwriters and performers, and that's what we did on this record."

The singer also revealed that he went through a number of personal and family issues over the last couple of years that inspired the lyrics on the new disc, saying, "I literally hated life... it was a legitimate breakdown of me as a human being and then going through all of the effort and hard work it takes to rebuild it and reaping the rewards."