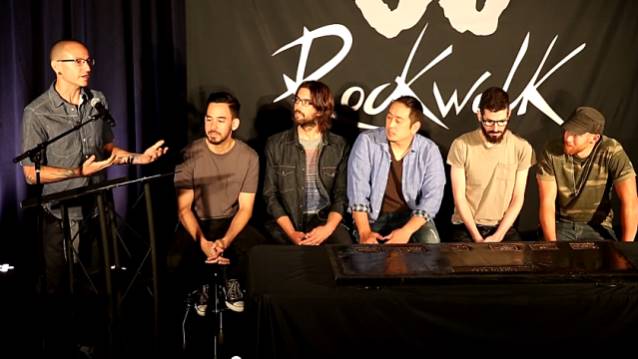 LINKIN PARK singer Chester Bennington said: "We're honored to have our music recognized by our peers. But to be added to Guitar Center's RockWalk on Sunset Boulevard, right where we started, is pretty surreal. We're really grateful to be here alongside so many of the artists that inspired us."

Radio personality Ted Stryker stated about LINKIN PARK: "They're one cohesive unit. They take what they do very seriously. And they also realize that just because you have a hit record, that does not guarantee anything. 'Cause in two years, you'd better have that same work ethic, you'd better be great to your fans, and you'd better work hard, you'd better tour like crazy and you've got to be incredible live. LINKIN PARK has done that from Day One."

Video footage of the ceremony — courtesy of Artisan News — can be seen below.

Guitar Center's RockWalk is dedicated to honoring those artists who have made a significant impact and lasting contribution to the growth and evolution of rock 'n' roll, blues and R&B.

LINKIN PARK has been steadily making hugely successful records for nearly 15 years with the same lineup. The Pulse Of Radio asked frontman Mike Shinoda about the band's recipe for success. "Luckily in our band, we've got a situation where, whether we agree or disagree, we sit down and we talk it out and we approach it like adults, and we also put our egos to the side and somebody can tell you something that's difficult to say and it's difficult to hear," he said. "And we all know that we're all coming at it from the perspective of making the best thing that we can."