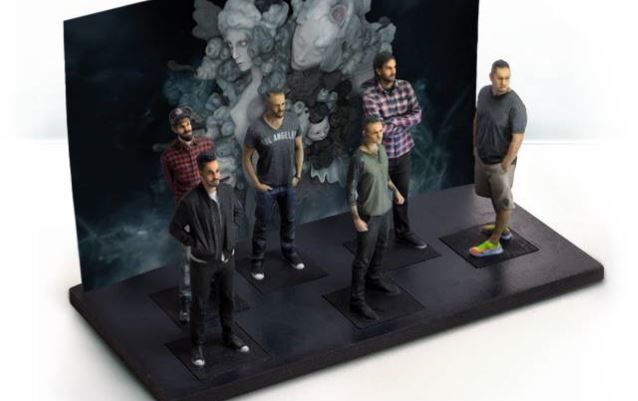 Staramba USA Corp., the German-American technology start-up joint-venture, is bringing fans of LINKIN PARK closer to their idols than ever before: from August 8 to September 19, the specialists in 3D body scanning and printing are joining the band's North American trek in support of LINKIN PARK's new album, "The Hunting Party". Across the 25 concert locations from West Palm Beach and Tampa, near Miami, to Montreal, Phoenix, Dallas and L.A., right through to Concord, near San Diego, fans can have themselves scanned for exclusive 3D selfies — mini statues — made of themselves, the band members, or even of themselves together with the band members. Whether with frontman Chester Bennington or lead guitarist Brad Delson: an unforgettable memory of the event, in the form of a figurine at a scale of 1:20 up to 1:5, will be delivered to your home by courier shortly after the concert experience.

So far, LINKIN PARK's 3D offering is internationally unique, as is the technology used for it.

To achieve the best possible quality and authenticity, Staramba relies on a high-end solution: for the first time, mobile body scanners are being used, which work on the same principles as photogrammetry. The two mobile "Scannerdomes" are controlled via the internet and are comprised of hundreds of individual computer lenses. They will be based at every concert location in a truck with the LINKIN PARK and Staramba logo.

LINKIN PARK's Mike Shinoda told MMR that the band's production on the "Carnivores" tour will offer plenty for fans' eyes as well as the ears.

"I feel like on this one the production that you'll see... it evolves over the course of the show pretty well," he said. "It's more video-based... I'm not gonna spoil any surprises as far as how the LED stuff gets, what's actually being presented on or as far as what the stuff actually looks like. You're gonna have to come to the show to see that stuff. But...it adapts with the show, and the show is a work in progress, like we do change things, usually subtly, from show to show.

"We take the live show seriously. It is, in some part of it, it's as much a piece of art as the music is, so we want it to be compelling and fit with the overall kind of aesthetic of what the band is up to right at this moment."

LINKIN PARK singer Chester Bennington told MMR that fans can expect to hear a good portion of the songs from "The Hunting Party" performed live as well as a number of older favorites.