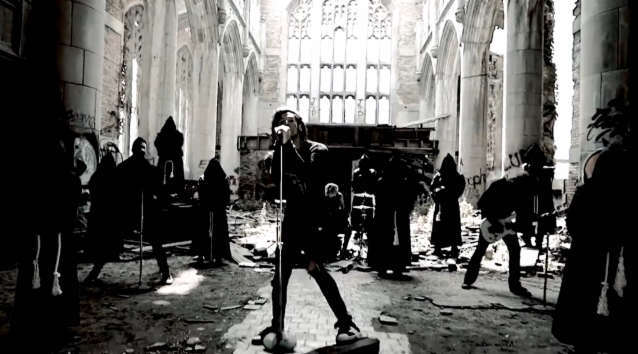 Hard rockers LIKE A STORM have released a music video for their track "Pure Evil". The clip was shot south of Chicago by Vince Lundi at the abandoned Methodist Church of Gary, Indiana, notorious for being one of the most dangerous cities in America. Lyrically, the song addresses the dark side of religious and political power.

Guitarist Matt Brooks states: "The coverups, scandals and exploitation that pervade the highest levels of church and government are just sickening. 'Pure Evil' seemed like the perfect way to sum up this absolute hypocrisy — these people appear so righteous, but at their core they are the worst of the worst."

The track, which blends heavy riffs, double-kick drumming, soaring solos, and an anthemic chorus, is taken from LIKE A STORM's latest album, "Catacombs", which was released this past spring via Century Media/RED. The disc was produced by LIKE A STORM's Chris Brooks, Matt Brooks and Kent Brooks.

Just this past month, LIKE A STORM announced its December U.S. headline tour. The band, best known for innovating the use of the didgeridoo with heavy rock, will hit the road with direct support from PALISADES starting on December 11 in Lincoln, Nebraska and will wrap on December 22 in Las Vegas, Nevada.

Hailing from Auckland, New Zealand, LIKE A STORM is the most successful New Zealand rock band in U.S. radio history.

LIKE A STORM has toured the globe with some of the biggest names in rock, including ALTER BRIDGE, SLASH, OZZY OSBOURNE, SHINEDOWN and THREE DAYS GRACE.

LIKE A STORM recently wrapped a massive U.S. run supporting GODSMACK and SHINEDOWN, where their high-energy live show garnered thousands of new fans on social media.